It's no secret that this year has been characterized by market and economic uncertainty due to inflation, the Fed, geopolitics, and more. Market unease has been prolonged by the fact that these economic effects take time to evolve. Inflation is not an overnight event but the result of supply and demand factors since 2020, compounded by monetary and fiscal policies. The effects of Fed rate hikes are felt over months and quarters, not days or weeks. The spike in energy and commodity prices due to the war in Ukraine will not be resolved quickly. Political events in China, the U.K., and the upcoming U.S. midterm election only add to this uncertainty. These facts underscore the need for investors to focus on the long run and resist the urge to react to every market movement, whether positive or negative.

In the long run, the stock market follows corporate profits 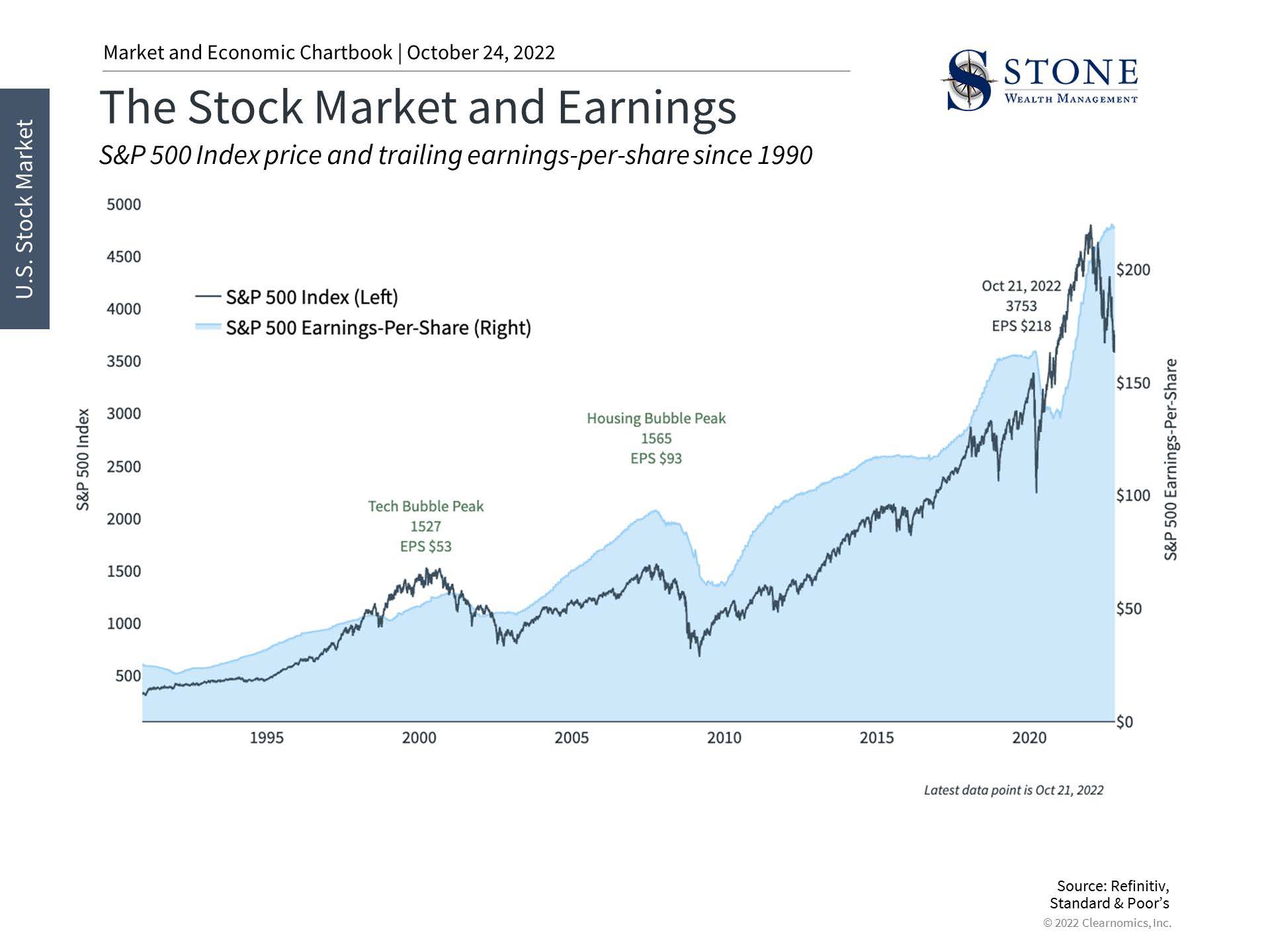 Perhaps the most important way to stay grounded is by being familiar with the facts and figures that drive markets in the long run, rather than the speculation and opinions that occupy headlines for a day or two. It's for this reason that investors focus heavily on corporate earnings since they are the link between the economy and markets. Although markets can fluctuate in the short run, rising earnings are what allow stocks to create wealth for investors over full business cycles. The performance of the stock market and earnings growth have diverged this year.

Inflation and slower growth are directly impacting corporate earnings reports but the numbers remain positive. Consensus estimates are that S&P 500 earnings-per-share will grow 6.9% over the next twelve months, still healthy but below the average of 7.9% since the mid 1980s. It is still early in the current earnings season for the third quarter, with about a quarter of S&P 500 companies having reported, but overall earnings are exceeding beaten-down expectations. Still, many companies are reporting rising costs, slower consumer demand, a buildup in inventories, etc., as would be expected in this environment. 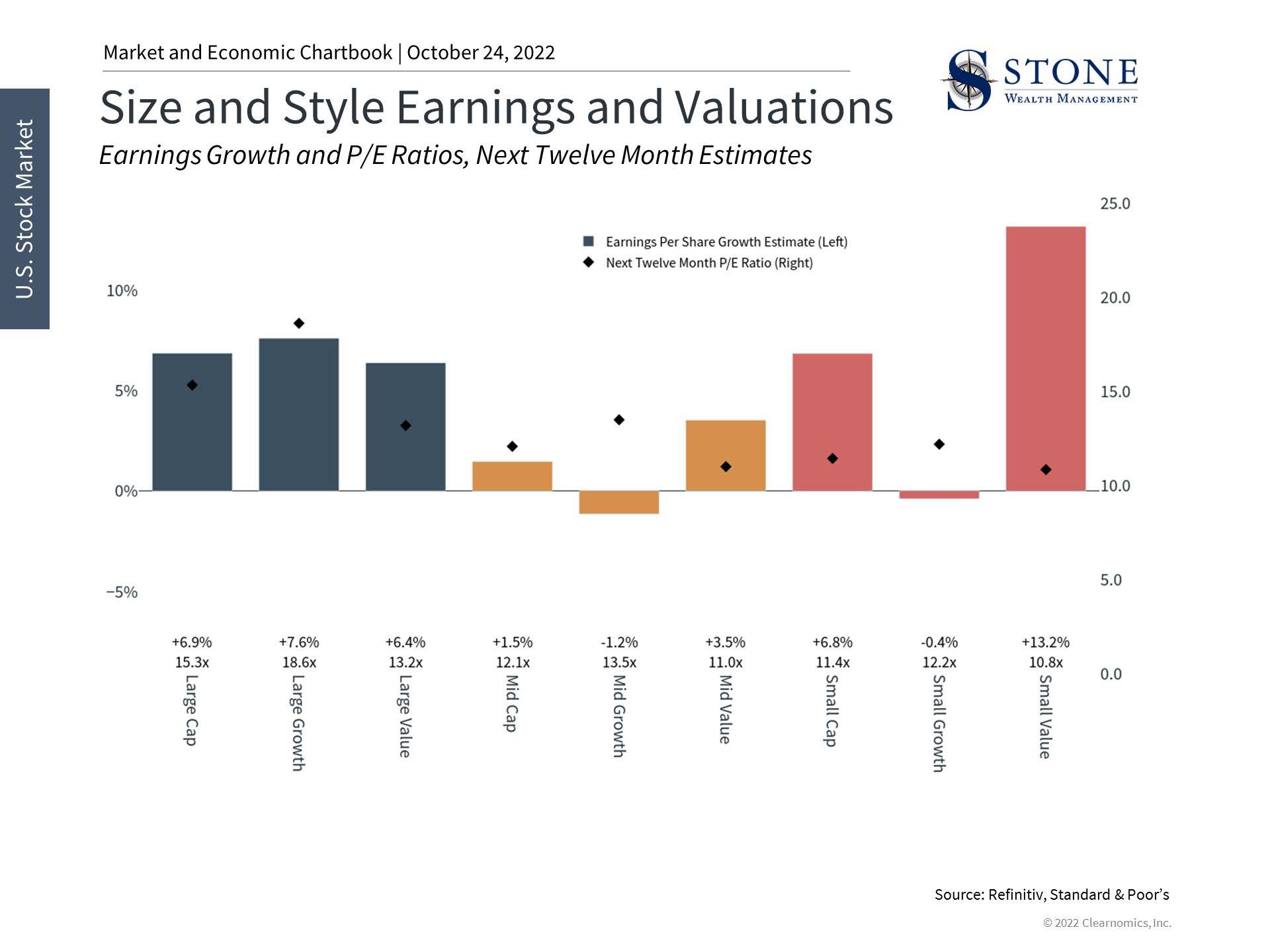 The chart above shows that earnings expectations differ across types and sizes of companies. Large cap stocks representing the largest U.S. companies are still expected to do well even if these numbers may fall further due to the strong U.S. dollar. A stronger dollar hurts larger companies disproportionately since they tend to have international sales. When the dollar strengthens, dollar-denominated goods become more expensive in other currencies, and foreign currency translation back to dollars is less favorable. It's difficult to pin down an exact percentage of revenues that come from overseas but estimates by Standard & Poor's suggests it's around one-third. Small cap companies, on the other hand, are more sensitive to U.S.-based demand and are directly impacted by slowing growth and rising costs.

The U.S. dollar is near record strength 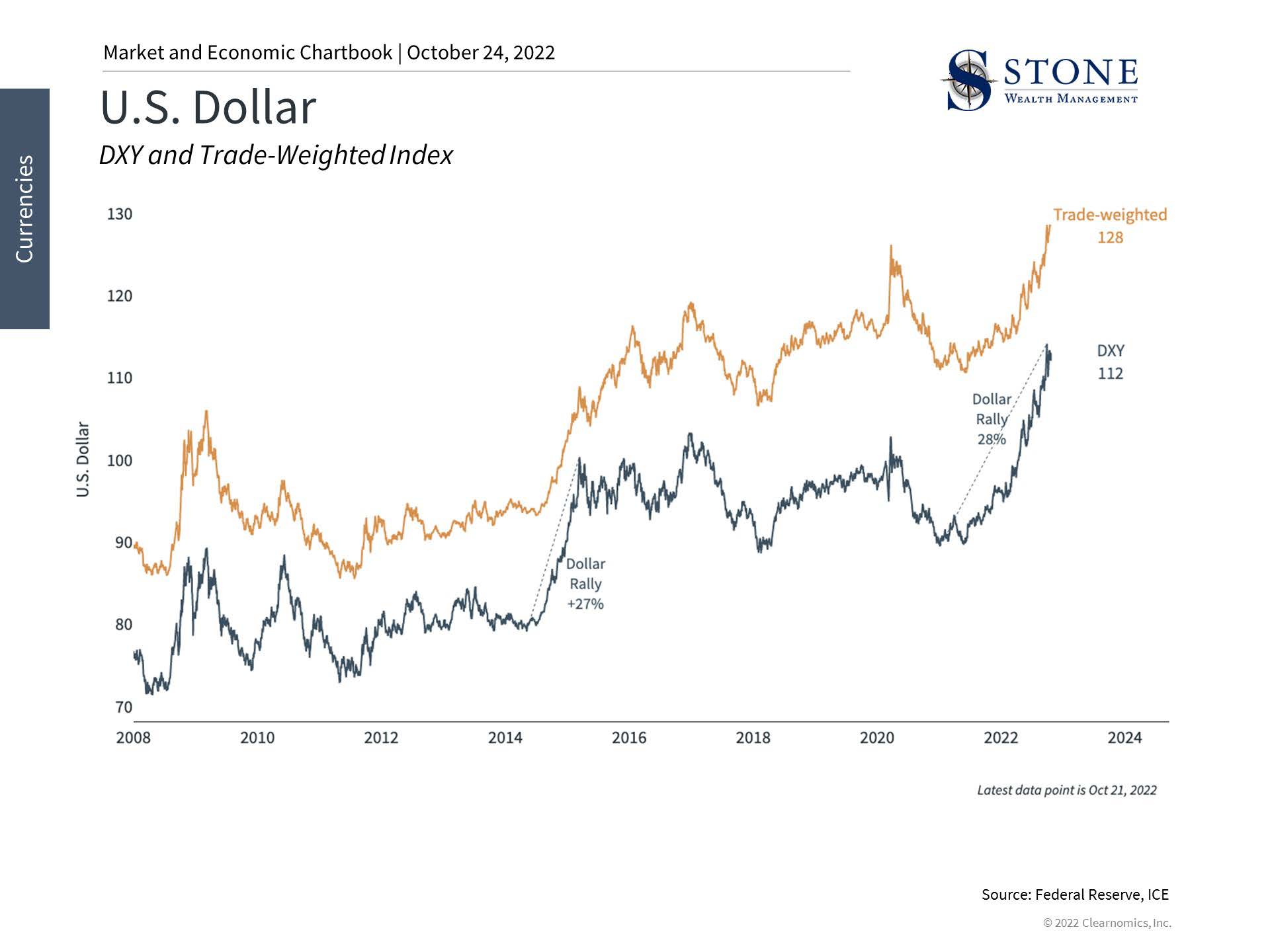 It is also positive that nine of the eleven S&P 500 sectors are expected to experience earnings growth over the next year. While analyst forecasts for earnings growth are not always accurate and earnings may fall further, current consensus forecasts suggest that investors expect a slowing of earnings rather than a 2008 or 2020-style collapse in profitability. Not only do growing earnings continue to support market valuations, which are the most attractive in years, but they are a reason to stick to appropriate asset class allocations in portfolios. Since not all sectors can be expected to perform well at all times, and rotations in sector leadership between tech, energy, and others have occurred recently, staying diversified both across and within markets remains important.

Another key consideration for earnings is how the consumer is faring. Government stimulus checks in 2020 and now rising prices for everyday necessities have impacted consumer spending in both directions. Personal savings rates reached a record level of 33.8% during the pandemic but have declined to 3.5% as of August, well below the historical average of 6.8%. The ongoing bear market and stalling housing prices may also have a "wealth effect" on how financially secure households feel, impacting spending further.

The IRS updates for 2023 may help many households 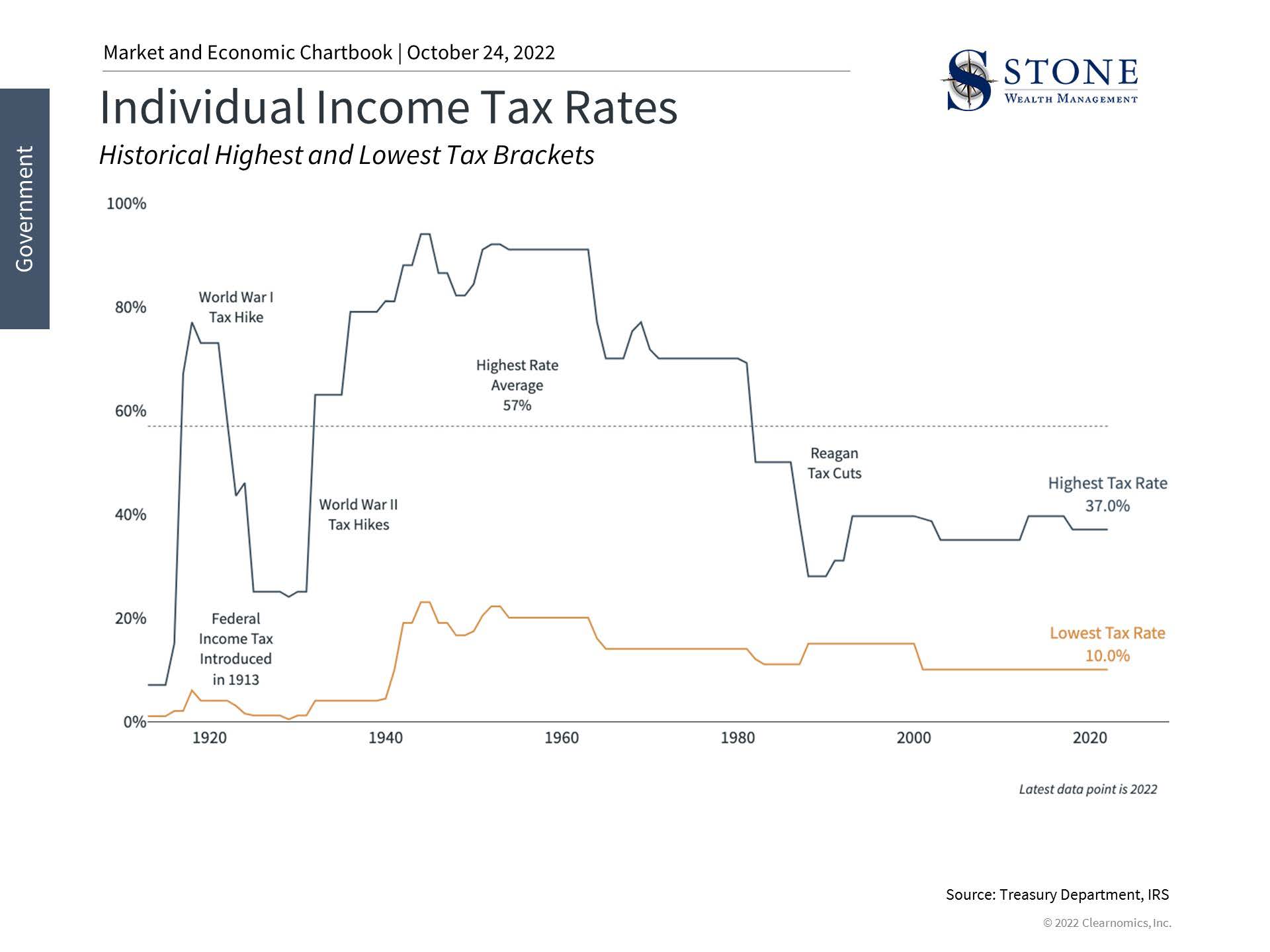 These impacts have not all yet appeared in the data since retail sales have continued to grow on a year-over-year basis. The recently announced IRS adjustments to income tax brackets and the standard deduction could also help consumers. Each year, the IRS makes adjustments to match the average year-over-year increase in what is known as the "Chained Consumer Price Index," so that taxpayers don't "creep" into higher tax brackets due to inflation. The IRS has announced 7% increases to these ranges and deductions for the 2023 tax year. As a result, many workers could see higher take-home pay starting January as payroll deductions decrease. These excess savings will be a welcome change for consumers even if they don't fully offset higher prices.