As challenging as international investing has been over the past several years, it has also never been more important. While developed and emerging markets may be more susceptible to economic shocks, geopolitical instability, and factors such as the pandemic, this is also why they may have higher expected returns in the long run. Investing across geographies, especially when valuations are attractive, is an important way to improve diversification as the global economy recovers from recent energy and inflationary shocks. How can investors maintain perspective around international investments today?

Global stocks are still in the red this year due to geopolitical risks around Russia's invasion of Ukraine, high energy prices, increased tensions with China, and many other challenges. With dividends, U.S. markets are still in correction territory with the S&P 500 down over 10% and the MSCI All Country World Index down 13%. The MSCI EAFE index of developed markets has fallen 16% in U.S. dollar terms and 4% in local currency terms. Similarly, the MSCI Emerging Markets index has declined 17% in dollar terms and 14% in local currency terms. These numbers make it clear that all regions have been affected by the global shocks that have driven performance this year.

Global markets have struggled against inflationary and geopolitical shocks 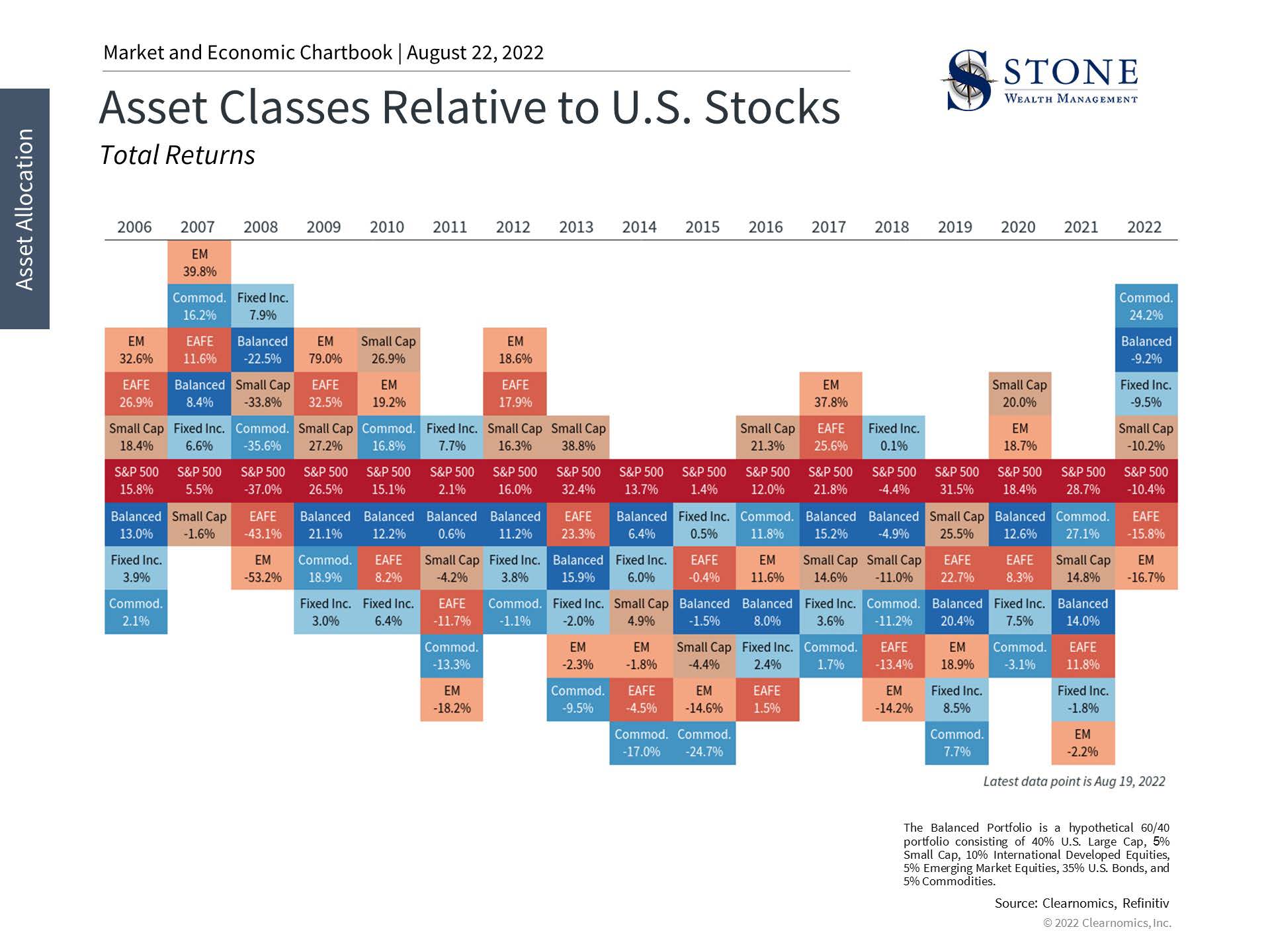 It is also the case that U.S. markets have performed extremely well over the past decade. For some investors, this may be a sign that focusing only on U.S. investments is enough. However, this has not always been historically true. As the chart above highlights, there have been many periods during which both developed and emerging markets have played important roles in balanced portfolios. As the global economy recovers, some of these opportunities could reemerge.

In this challenging environment, there are a few facts that investors should keep in mind. First, international investments, especially in emerging markets, naturally involve greater levels of risk than investing in the U.S. alone. Specifically, there may be political, financial, and regulatory risks related to holding these investments as well as to the underlying companies and industries. Being aware of these risks and managing them well is an important part of holding a global portfolio.

For example, investments in China have been in the news over the past couple of years due to increased scrutiny by the Chinese government. Industries such as tech, education and financial services have faced new regulations that directly impact their businesses, affect their U.S.-listed stocks, and have even prevented IPOs. More recently, heightened tensions between the U.S. and China over Taiwan have increased the possibility of trade and supply chain disruptions, worsening sentiment in markets, and other problems.

These risks stem not only from within each emerging market but can originate from the U.S. as well. The Holding Foreign Companies Accountable Act passed by Congress in 2020, for instance, steps up regulation of foreign stocks traded on U.S. exchanges through regular audits. This increases the burden on these companies and can make it more difficult for U.S.-based investors to make international allocations, since failure to comply can put a company at risk of being delisted.

However, these additional risks also create opportunities for patient investors and are important reasons that diversifying across many stocks is important. In the long run, investors can be rewarded for stomaching greater levels of risk not just in U.S. stocks, but internationally as well. Today, valuation ratios for developed and emerging markets are not only far below those of the U.S., but are still well below their historical averages at 12.4 and 11.1 times next-twelve-month earnings, respectively. This suggests that there may be many attractive opportunities for investors who are willing to look beyond U.S. borders. 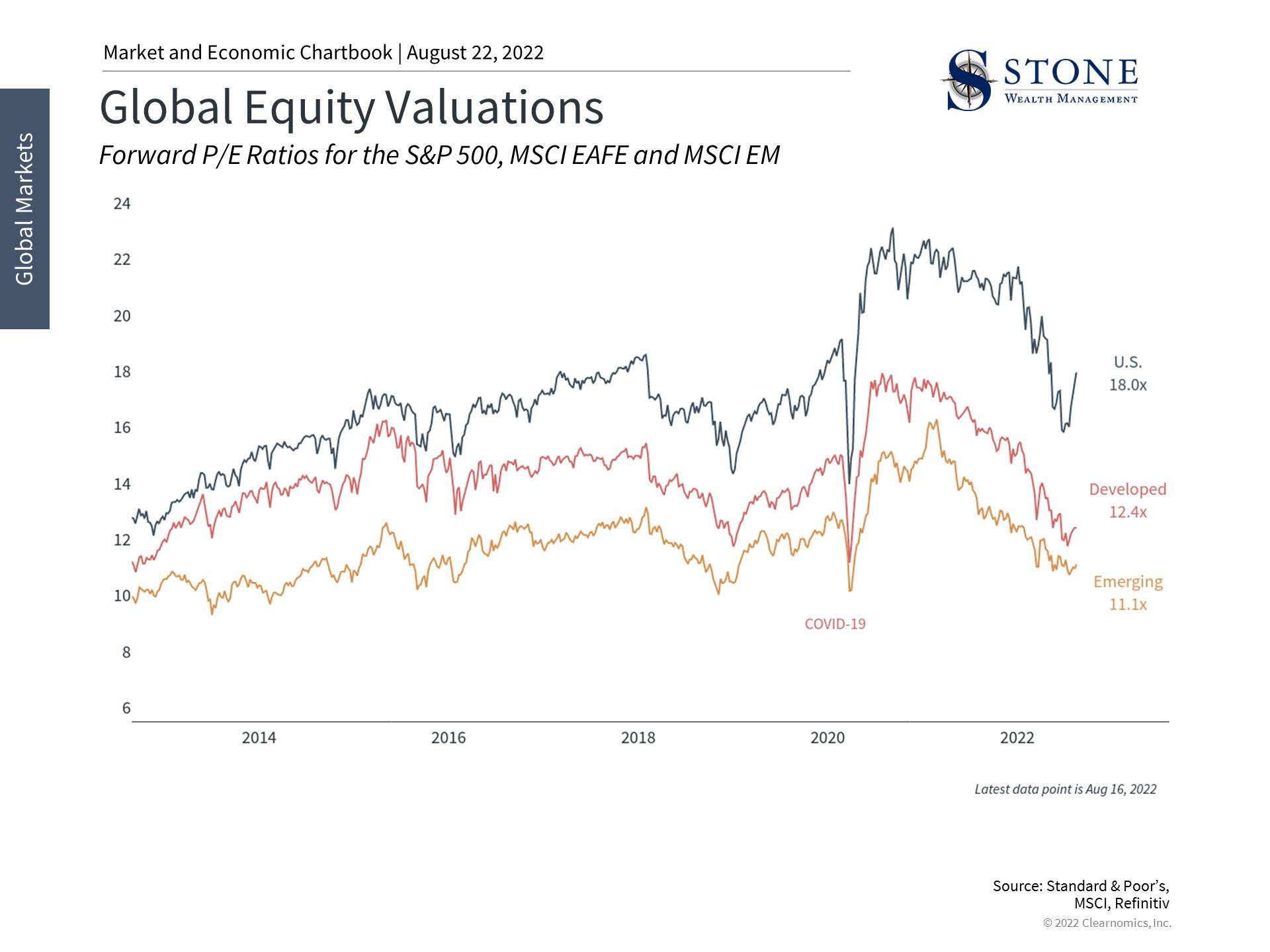 Second, many emerging markets are still maturing as they catch up to their growing economies. One indicator of the level of financial development is the ratio between the (inflation adjusted) stock market capitalization and GDP of a country, often referred to as the Buffet indicator. According to the World Bank's 2020 calculations, the U.S., with its highly developed financial markets, had a market cap to GDP ratio of nearly 195%. Emerging markets such as China, Korea and India, had ratios of 83%, 133% and 97%, respectively.

The fact that many countries have a long way to go in expanding and improving their capital markets creates opportunities for investors. This is because more efficient capital markets can help small and large companies alike gain access to funding and boost growth rates. While there may be barriers to this development due to government policies, the expansion of markets is often a positive sign over years and decades.

The dollar has strengthened against major currencies 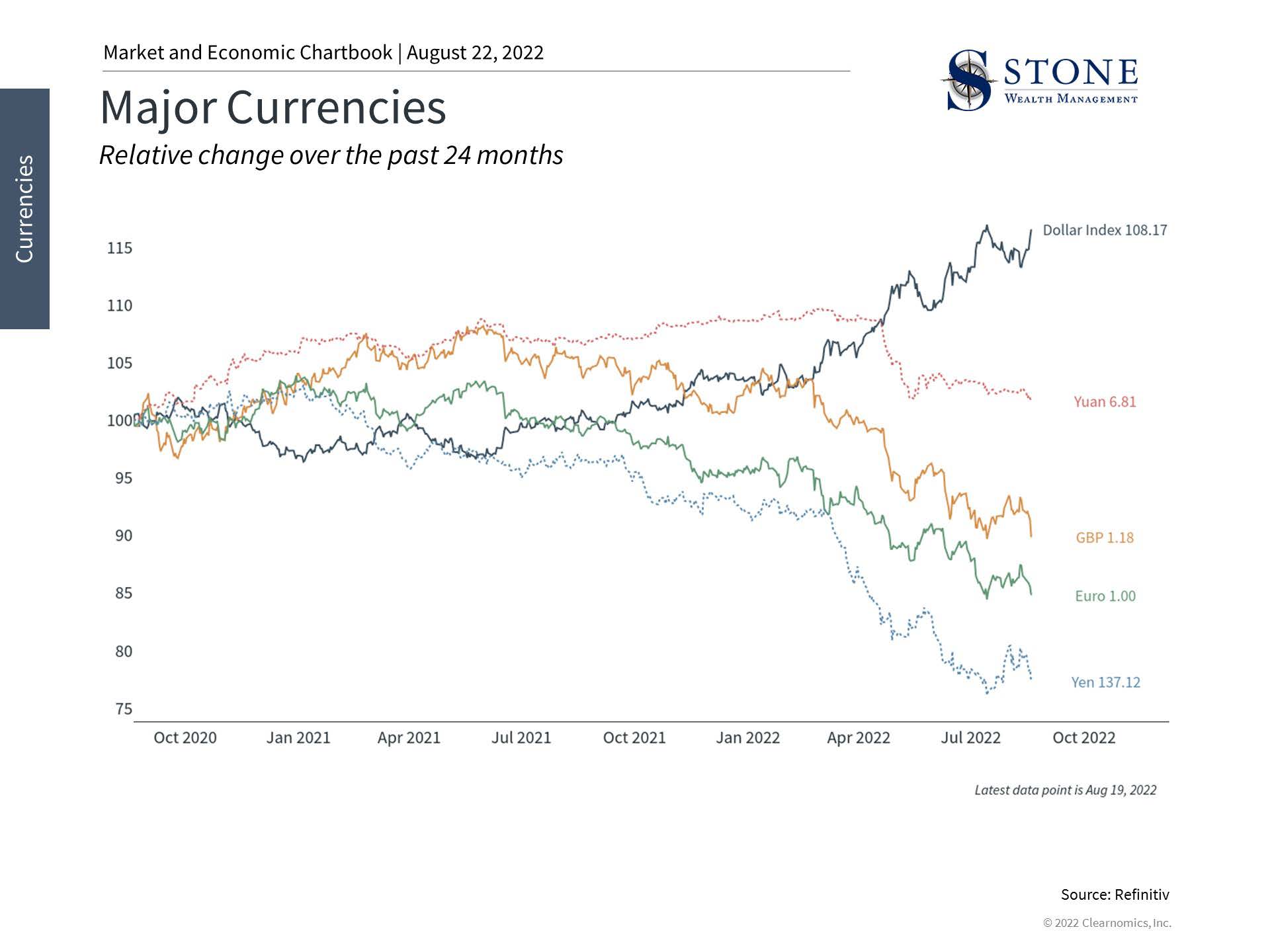 Third, currencies can add an additional layer of complexity to international investing that doesn't exist when buying and selling domestic stocks. This is especially challenging when the U.S. dollar is appreciating, as it has been this year. When the dollar strengthens, international investments lose value in dollar terms since they are made in foreign currencies which become weaker. This is why there has been such a large gap between the U.S. dollar and local currency returns of foreign investments this year.

However, it's the direction of the dollar that matters to future returns. While currencies are difficult to predict, the dollar is at its highest level since 2002 due to the U.S. economic recovery, Fed rate tightening, and more. Many of these factors could ease and begin to reverse as other economies catch up, especially because other central banks are tightening rates as well. Moreover, currencies tend to fluctuate and self-correct over time. A strong dollar may help to ease inflation and slow growth somewhat, which could bring the currency down over time.

Thus, it's important for long-term investors to maintain a globally diversified focus across regions, countries and asset classes. Over the long run, both developed and emerging markets may be volatile, but this goes hand-in-hand with higher expected returns. In fact, many international markets are significantly cheaper on a valuation basis than the U.S., and the dollar is already at its highest level in 20 years.