The stock market is adjusting to a new chapter in the inflation story that could keep Fed policy rates higher for longer. Recent market swings may be challenging, but this adjustment period is both natural and expected since higher interest rates directly affect the pricing of stocks and bonds. Tighter monetary policy also rekindles questions around whether the Fed can achieve a so-called "soft landing" as it walks the line between combating inflation and preventing a recession. How can investors remain patient and view this market environment in the right context?

In times like these, it's helpful to have a broad perspective by remembering how we got here. This inflationary period began with pandemic-era shortages and supply chain problems. This was made worse by surging consumer and business demand during the swift economic recovery, fueled in part by stimulus checks and loose central bank policies. These factors caused the Consumer Price Index (CPI) to accelerate past 2% on a year-over-year basis in the first half of 2021 as it climbed steadily to 7% at year end. Then, the war in Ukraine at the beginning of the year pushed energy and food prices higher, causing consumer prices to surpass 9% and producer prices to reach almost 12%. All of these numbers represent the largest price increases since the inflationary period of the 1970s and early 1980s. 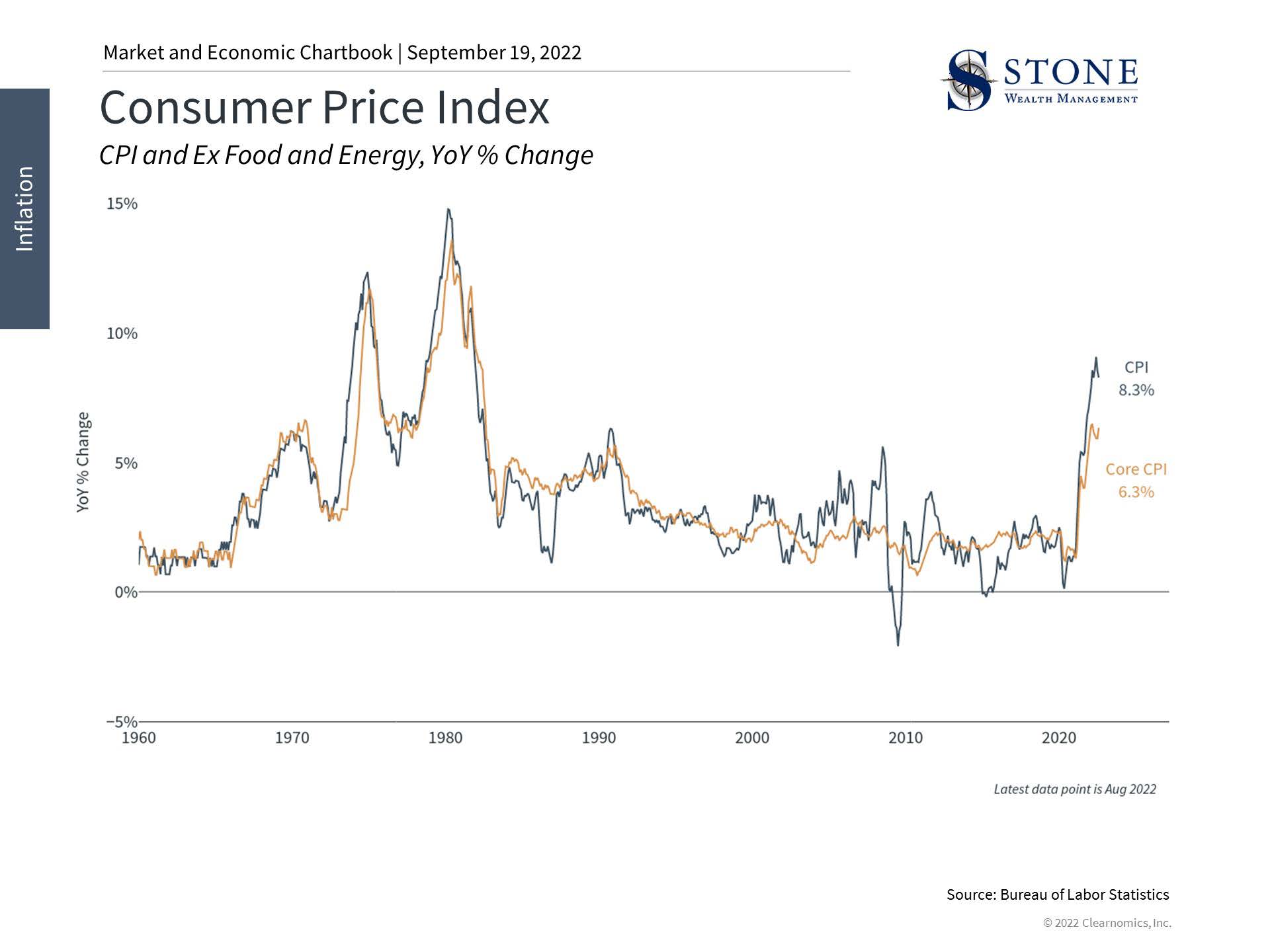 The good news recently is that energy prices have fallen dramatically since June. Oil is now trading under $90 per barrel of Brent crude, down from its peak of $128 in March. The average price of gasoline has fallen from $5 for regular unleaded to under $3.70 over the same period, driving down the gasoline component of CPI by 10.6% in August. While this is still one of the highest gasoline prices experienced over the past decade, its decline is positive for consumers, businesses and investors.

So, why do markets expect the Fed to tighten further if energy prices are falling? While this driver of inflation has reversed, the bad news is that the effects of inflation have broadened. Measures of "core inflation," i.e. inflation excluding food and energy prices, re-accelerated in August to 0.6% month-over-month, or a rate of 6.3% year-over-year. This is worrisome because these increases are not in one or two categories, but across many consumer goods and services. For instance, the price of new vehicles rose by 10.1% over the past year, shelter by 6.2%, and medical care services by 5.6%.

These numbers led market expectations of the Fed to shift upward. Rather than reaching a fed funds rate of 3.75% by year end, the market now expects it to be closer to 4.25%. The peak rate in 2023 has also moved higher to about 4.5% rather than 4%. Interest rates across the yield curve have shifted as a result too, with the 10-year Treasury yield now around 3.5%. Mortgage rates have surpassed 6%, their highest level since 2010 and above their 30-year average of about 5.9%. This could further dampen an already softening housing market. 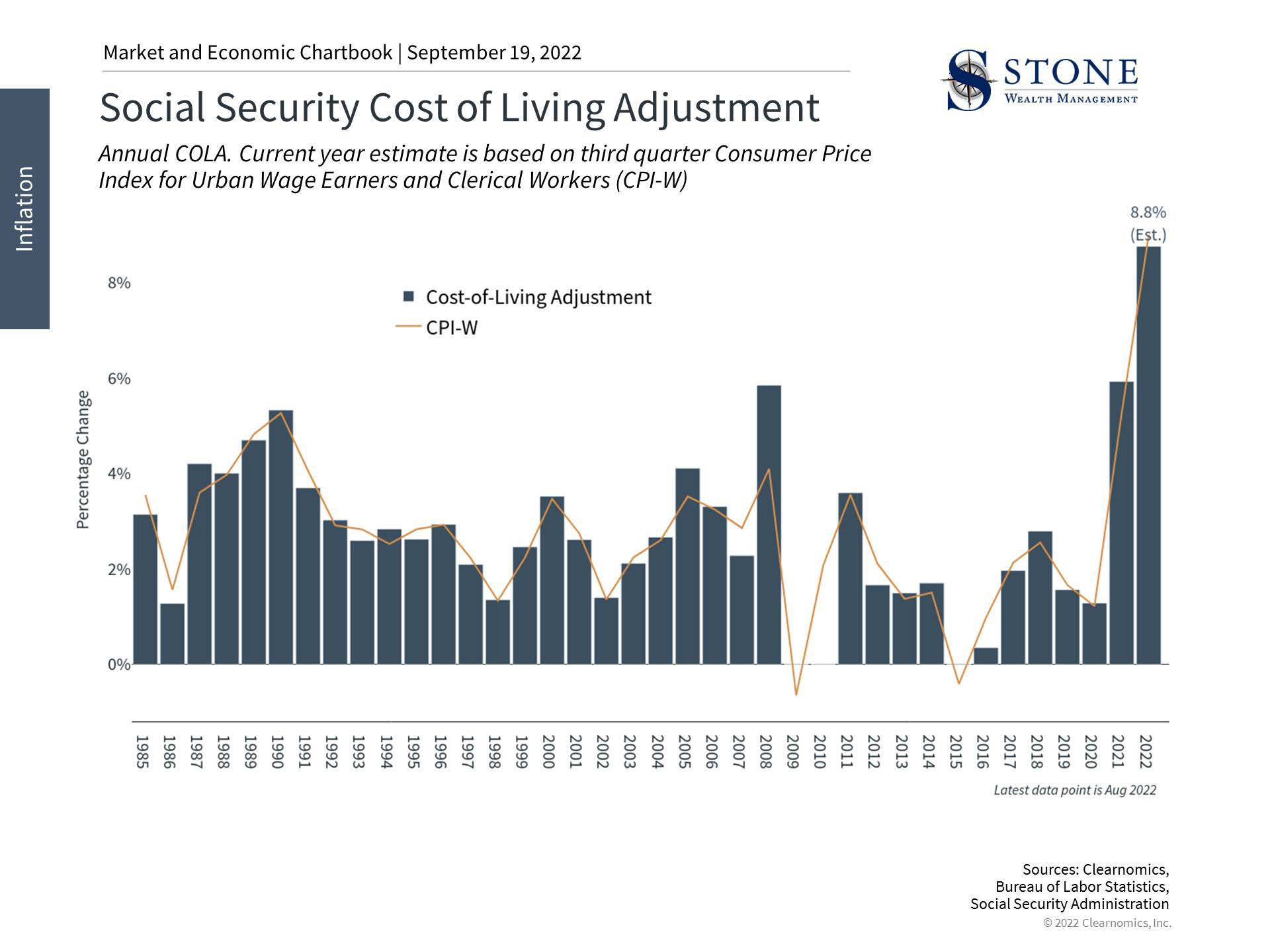 However, it's not all bad news. First, the Social Security Cost-of-Living Adjustment (COLA) for 2022 will be the largest since the early 1980s. This calculation is based on the average third quarter inflation rate for urban wage earners and clerical workers (known as CPI-W) each year, which means that it is on track to be above 8%. While this doesn't necessarily make up for low COLA adjustments since 2009, it is positive for those collecting social security, especially if energy prices and headline inflation decline.

Second, there are signs that inflation expectations are easing. Consumer surveys, for instance, show that one-year expectations have fallen from 5.4% earlier this year to 4.6%. This is driven largely by falling gasoline prices, but is a good sign nonetheless of improving consumer sentiment. The key to the Fed's balancing act is for consumers to remain financially healthy and to continue spending. 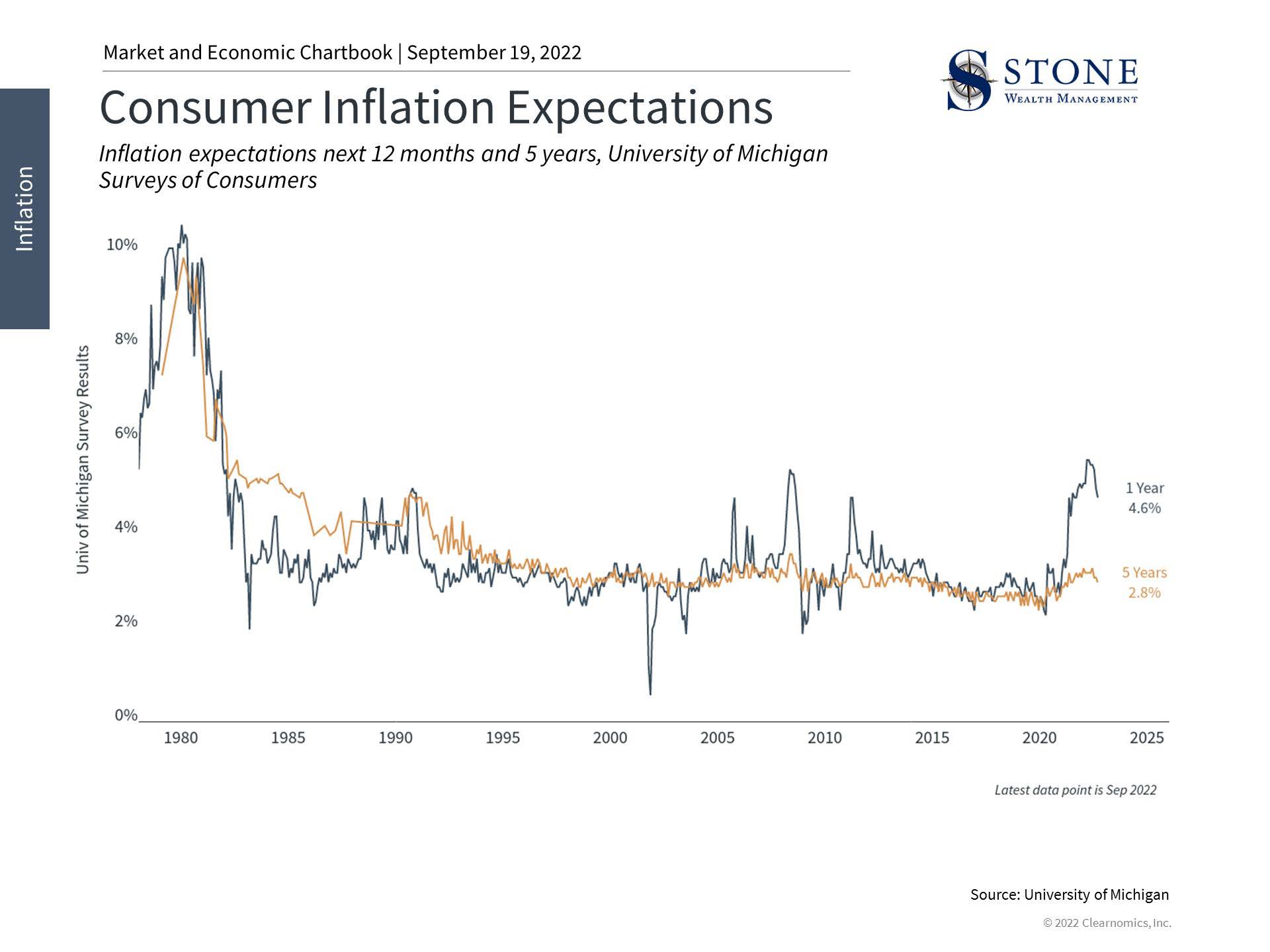 Finally, stock market valuations continue to hover around their most attractive levels since before the pandemic. The forward price-to-earnings ratio for the S&P 500 is 16.9x, only slightly above the long-run historical average of 15.5x, and well below the peak of 23x just two years ago. With companies still expecting positive earnings growth, there are still many trends working in the market's favor. Having the discipline to invest when others are fearful is one of the hallmarks of successful investing.

Thus, despite recent market swings, it's clear that investors ought to stay patient and maintain a longer-term perspective in this environment. Markets often need time to adjust to new data and expectations before moving forward again, just as they did from June to August when many Fed expectations were priced in. It's also the case that markets almost never move in a straight line, but fluctuate just as rates, inflation and energy prices have this year. Even if the Fed is expected to keep rates higher for longer, the market has shown that it can stabilize and recover once it digests these facts.