The Fed is caught between a rock and a hard place as it tries to balance historic inflation levels with a slowing economy. Many leading economic indicators suggest that growth is decelerating due to rising prices, geopolitical events, and the natural end to a strong recovery. This week's Fed meeting and the GDP report for the second quarter will shed more light on how urgently the central bank will tackle inflation in light of these economic challenges. There are wide-ranging implications for investors, especially with the stock market at attractive levels. What do long-term investors need to know about the economic situation to position for an eventual recovery?

Typically, GDP reports are closely followed but entirely backward-looking since they reflect events that took place the previous quarter. GDP reports can shed light on the magnitude of the impacts on consumer, business, and government spending, as well as trade activity. However, this week's report will be scrutinized for another reason - whether or not it will be the second consecutive quarter of negative growth, which some consider to be a sign of a recession.

The money supply has grown significantly since 2020 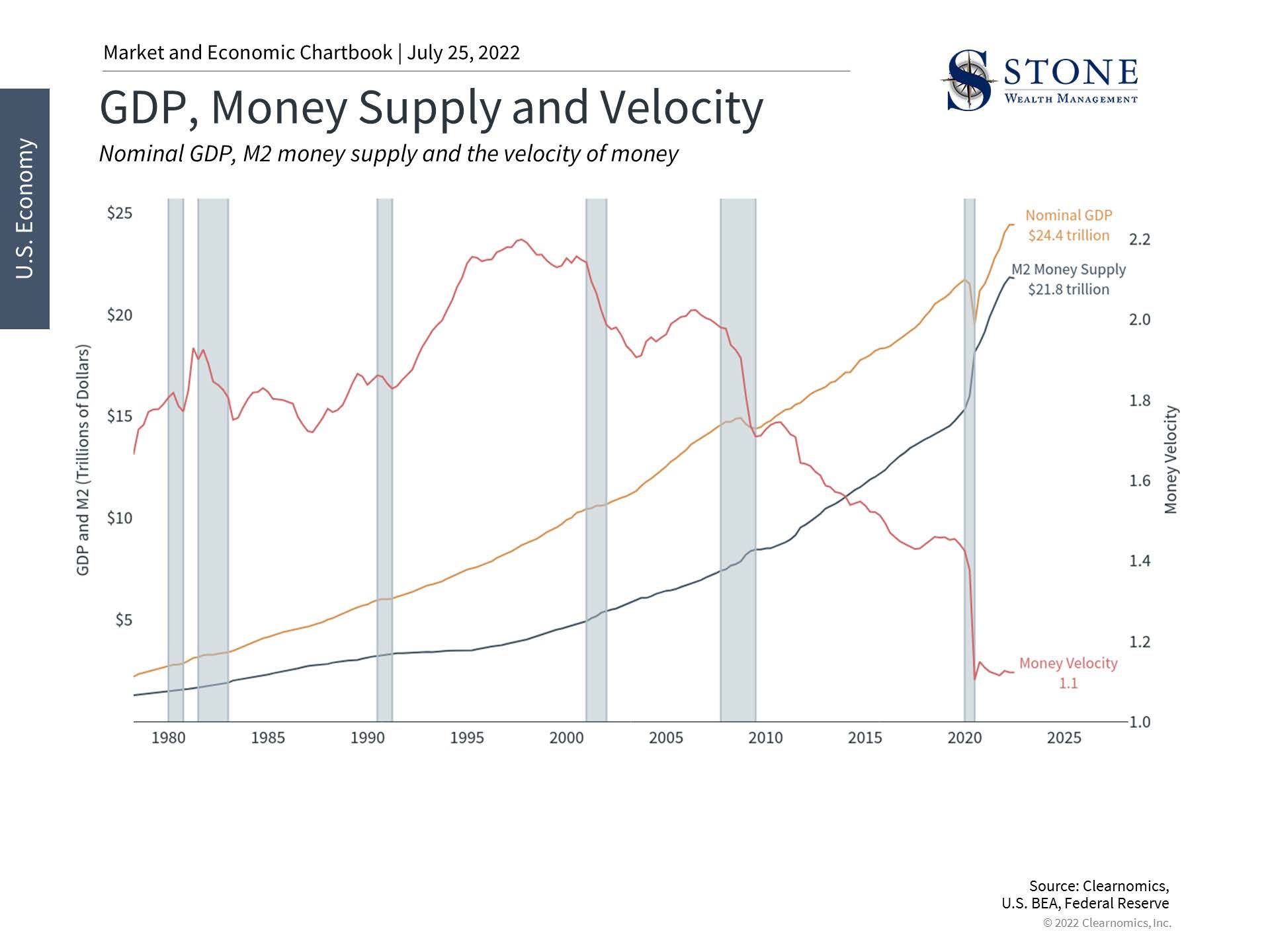 The current consensus estimate among economists is that the economy grew about half of one percent in the second quarter. Even if this turns out to be wrong, this would not be unexpected given rising inflation. What is driving this inflation, how long it will last, and who is politically to blame are matters of heated debate.

One contentious area is around the money supply and whether this has driven prices higher across the economy. The chart above shows one measure of the money supply known as M2 which includes components such as U.S. currency, checking and savings accounts, and money market funds. This measure rose dramatically as the Fed responded to the pandemic.

However, unlike the cost of oil which has clearly driven gasoline prices higher for consumers and businesses, the jury is still out on the long-term effects of loose monetary policy. Historically, inflation has been worsened or prolonged by central bank errors. If there is too much money chasing the same amount or fewer goods and services, then the prices of those goods and services will rise.

But the supply of money isn't the only factor here. The concept of the "velocity of money" matters too - it measures how many times each dollar flows through the system. If there are many more dollars, but they move through the system fewer times, then growth and inflation could remain the same. This is one reason that the stimulus after the crisis of 2008 never spurred inflation - velocity fell as banks held onto reserves and slowed their lending activities. This is also what we see over the recent period - the velocity of money has plummeted because nominal growth has not picked up faster than the growth in the money supply. 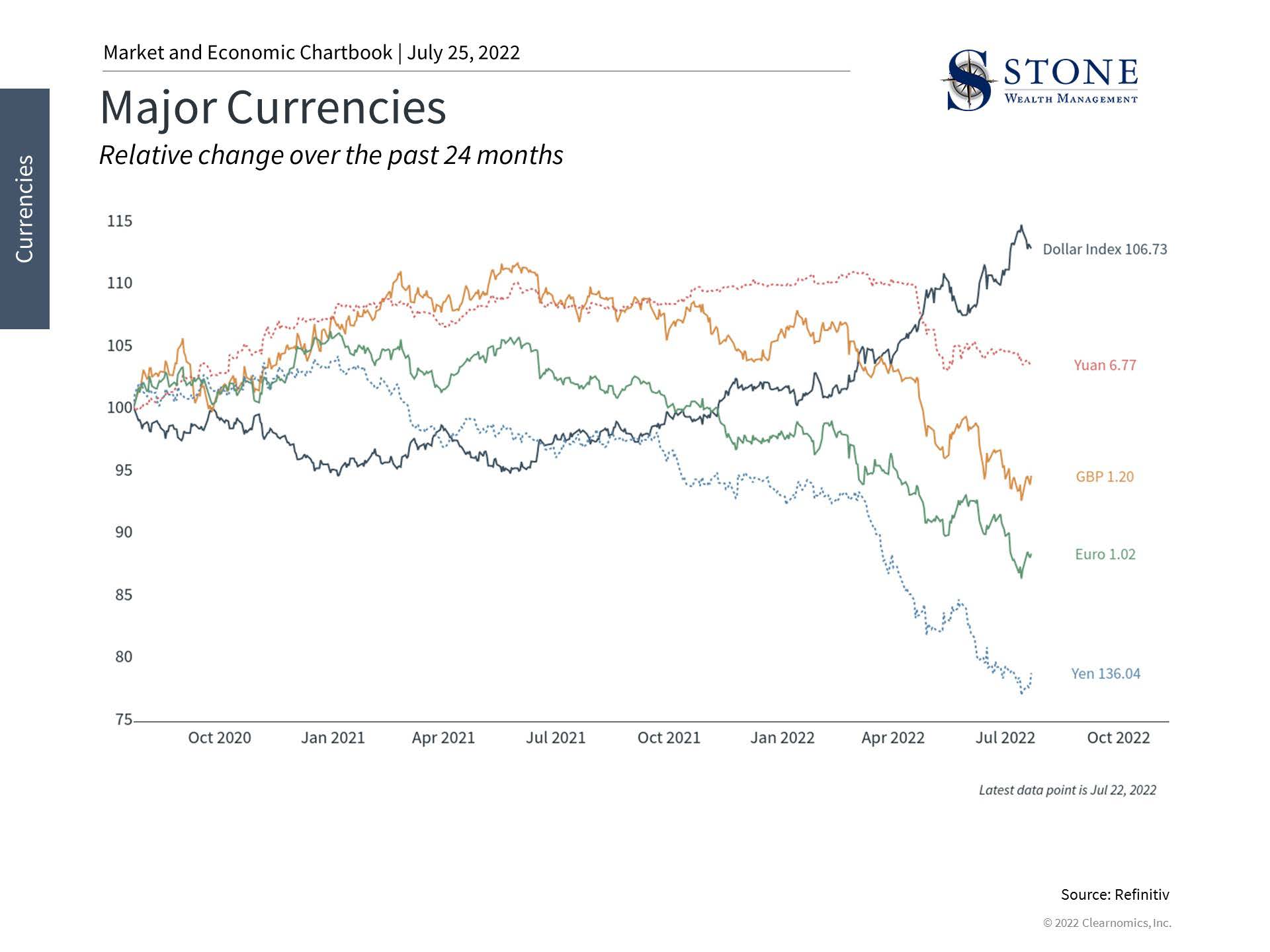 All of this is fairly technical but there is a simple point: Fed actions affect the economy with a long lag and can often impact consumers and businesses in unexpected and indirect ways. For example, interest rate hikes have helped to strengthen the U.S. dollar, to the point that even the Euro is hovering around parity. This has two implications for inflation and growth.

First, a strong dollar is great news for American travelers and consumers buying foreign goods who will find that their currency goes much further. This naturally lowers inflation since the prices that consumers pay will decline. In theory, a stronger dollar and lowers oil prices, since the commodity is mostly denominated in U.S. dollars.

Second, a strong dollar also slows the economy somewhat since foreign buyers will find U.S. dollar-denominated products more expensive. This can also drive down inflation since there will be less demand for certain goods and services. Thus, a stronger dollar naturally tightens financial and economic conditions which may slow the economy, but perhaps more importantly combats inflation. 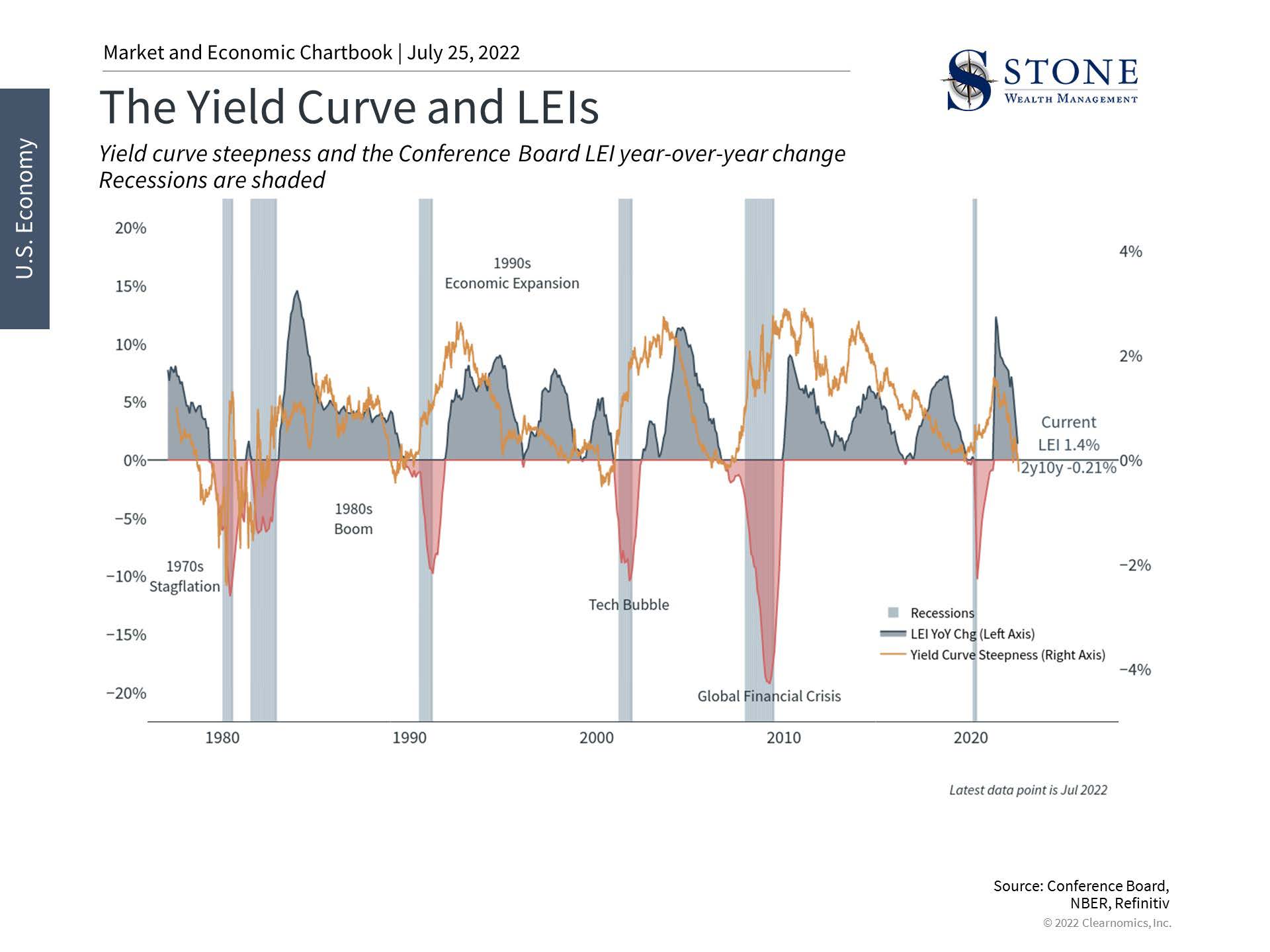 Of course, the challenge lies in the balance between battling inflation and preventing a deep recession. Fortunately, corporate earnings and consumer balance sheets continue to be robust which increases the hopes that any recession may be mild. Regardless of the exact outcome, markets have been preparing for the worst for some time. The S&P 500 is still hovering slightly above bear market levels, with valuations at their most attractive levels in years. Investors ought to take a long-term perspective and not focus too much on any one Fed meeting or GDP report.