The sudden rise in interest rates has spooked some investors. Fears of runaway inflation, the Fed losing control, and concerns over highly-valued sectors have resulted in renewed market volatility. Of course, this adds to the ever-growing wall of worry around the pandemic, tech stocks, retail investor behavior, and more. While shocks to interest rates can certainly rattle markets, history shows that these events are actually positive in the long run. How can patient investors keep all of these concerns in perspective as the outlook remains uncertain?

First, it's important to understand the many factors that influence interest rates. In the short run, the buying and selling of bonds can mechanically push rates lower or higher. When investors are concerned about the world, as was the case early in the COVID-19 pandemic, they often buy Treasuries and similar securities as a "flight to safety." This increases the prices of these bonds and lowers their yields. The opposite is true when investors sell bonds, whether because they fear inflation or seek greater risk and reward, which pushes interest rates higher.

Over time, through this buying and selling, interest rates settle in at levels that correspond to expectations on economic growth and inflation. Thus, interest rates can be both reflections and forecasts of economic trends. Rising rates signal the possibility of stronger growth ahead which is often positive for riskier assets like stocks. So, although spikes in interest rates can be disruptive, especially if it impacts the borrowing costs of individuals and corporations, rising rates are usually a positive sign for markets once the dust settles.

Second, rising interest rates are thus normal and are not necessarily something to be feared by investors. They are consistent with the positive economic data over the past several weeks, including an improving job market, recovering industrial production, and the on-going rollout of vaccines. While some may be concerned about an overheating economy and accelerating inflation, these are unlikely to be the case today. The recovery is still in its early stages and inflation has been muted over the past decade due to several global trends.

However, this does mean that investors should keep a close eye on their asset allocations, and possibly seek expert guidance. Many fixed income sectors have declined this year as a result of higher interest rates and shrinking credit spreads, with the overall U.S. Aggregate Bond Index down 2%. Valuations for some bonds are elevated and finding income will continue to be a challenge for investors, just as it has been since 2008. Fortunately, fixed income will likely still provide a counterbalance to portfolios in periods of uncertainty, even if yields are lower.

Finally, if the past two business cycles have taught us anything, it's that Fed rate hikes are nothing to fear if they occur alongside an improving economy. In fact, the fear is often worse than the ordeal itself. For instance, the 2013 short-term spike in rates known as the "taper tantrum" was a consequence of investors over-reacting to then-Fed president Ben Bernanke's comments. Although rates spiked for a few months, they eventually settled back down. The stock market continued to rally for years thereafter.

At the moment, market expectations of the first Fed rate hike have been pulled up from 2024 to early 2023 - still nearly two years away. In general, the previous cycle showed that the Fed can maintain their monetary policy goals in the face of market skepticism. In fact, it kept the federal funds rate at the zero-lower-bound from the global financial crisis until December 2015, despite a recovering economy and rising stock market. Although it's understandable that the market often scrutinizes the Fed, it's often more important to focus on the underlying economic trends instead.

For long-term investors, all of this reinforces the need to stay focused on financial goals rather than daily market headlines. Below are three charts that provide perspective on recent rate spikes: 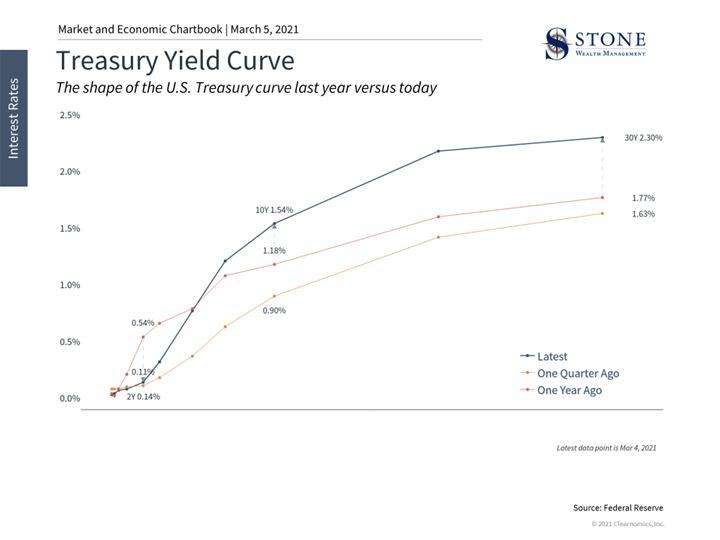 Medium and long-term interest rates have risen this year, stoking concerns over the Fed, inflation and more. It's not unusual for longer-term rates to rise at the beginning of a recovery, as was seen in 2001 and 2009. Still, short-term shocks to rates can affect markets and the "real" economy by impacting borrowing rates for individuals and corporations.

2. Many fixed income sectors are underperforming as a result 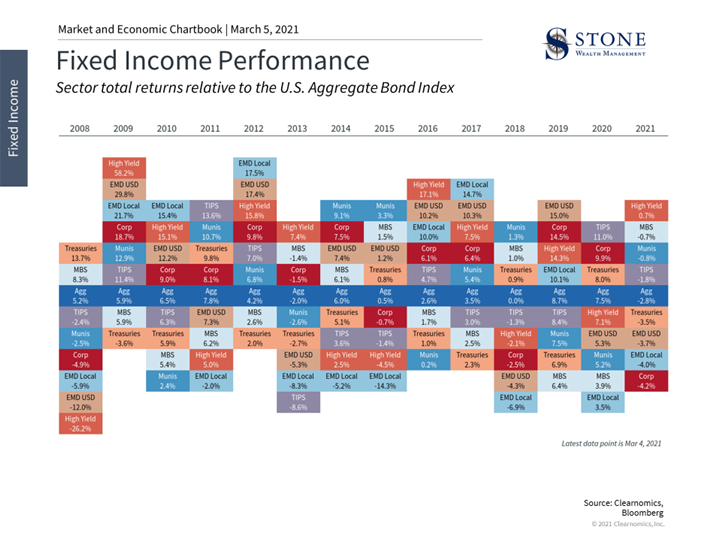 Rate spikes and shrinking credit spreads have resulted on a drag across fixed income sectors. The U.S. Aggregate bond index is down over 2% while Treasuries and Corporates have suffered losses year-to-date as well. It is certainly the case that lower yields and higher valuations make investing in fixed income more challenging. 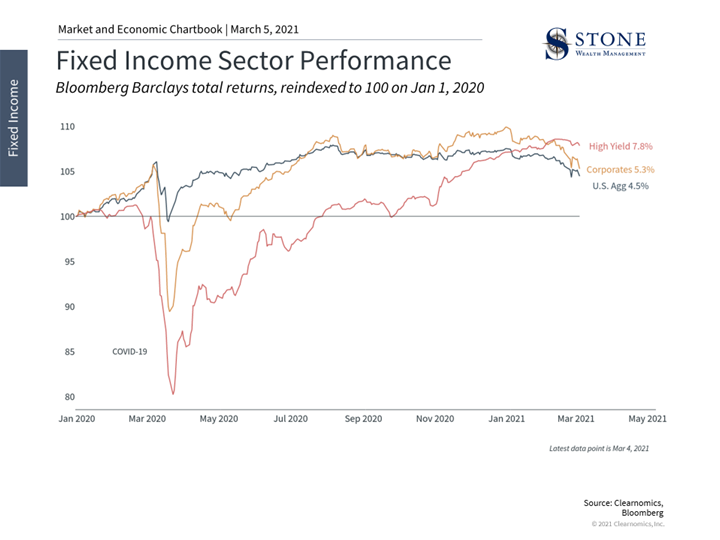 However, fixed income will likely still provide stability to portfolios in difficult market environments. Sticking with the most appropriate asset class allocation in order to achieve long-term goals is still the primary challenge for investors today.

The bottom line? Investors should remain patient and disciplined as the market adjusts to the economic recovery. Maintaining a proper portfolio mix to achieve long-term financial goals should continue to be the main focus.

Please Contact Us to make an appointment with Morgan and/or Kacie  if you have questions or would like to discuss further!