The latest inflation numbers confirm that the prices of everyday goods and services are still rising despite Fed rate hikes and a slowing economy. Major stock market indices continue to be in or near bear market levels with the S&P 500 down 25% year-to-date, while interest rates jumped further last week with the 10-year Treasury yield rising above 4%. Whether the Fed can regain control of inflation while keeping the economy steady continues to be the central question for investors and economists. Since inflation data is only released monthly, GDP data quarterly, and the Fed only meets once every six weeks, it could be some time before this question is fully answered. How can investors stay patient and take advantage of attractive opportunities in the months ahead?

The recent Consumer Price Index report showed that while inflation is improving in some areas including energy and used cars, it is broadening in important categories such as shelter, transportation services, and medical care. Core inflation, which excludes food and energy, has increased 6.6% over the past year, the fastest pace in 40 years.

These data all but guarantee that the Fed will continue to raise rates quickly. Current market expectations are for the Fed to increase rates 0.75% in November and again in December, reaching a fed funds rate of 4.5% by year end. To put this in perspective, the fed funds rate was zero percent as recently as March.

Economic indicators point to a slowdown 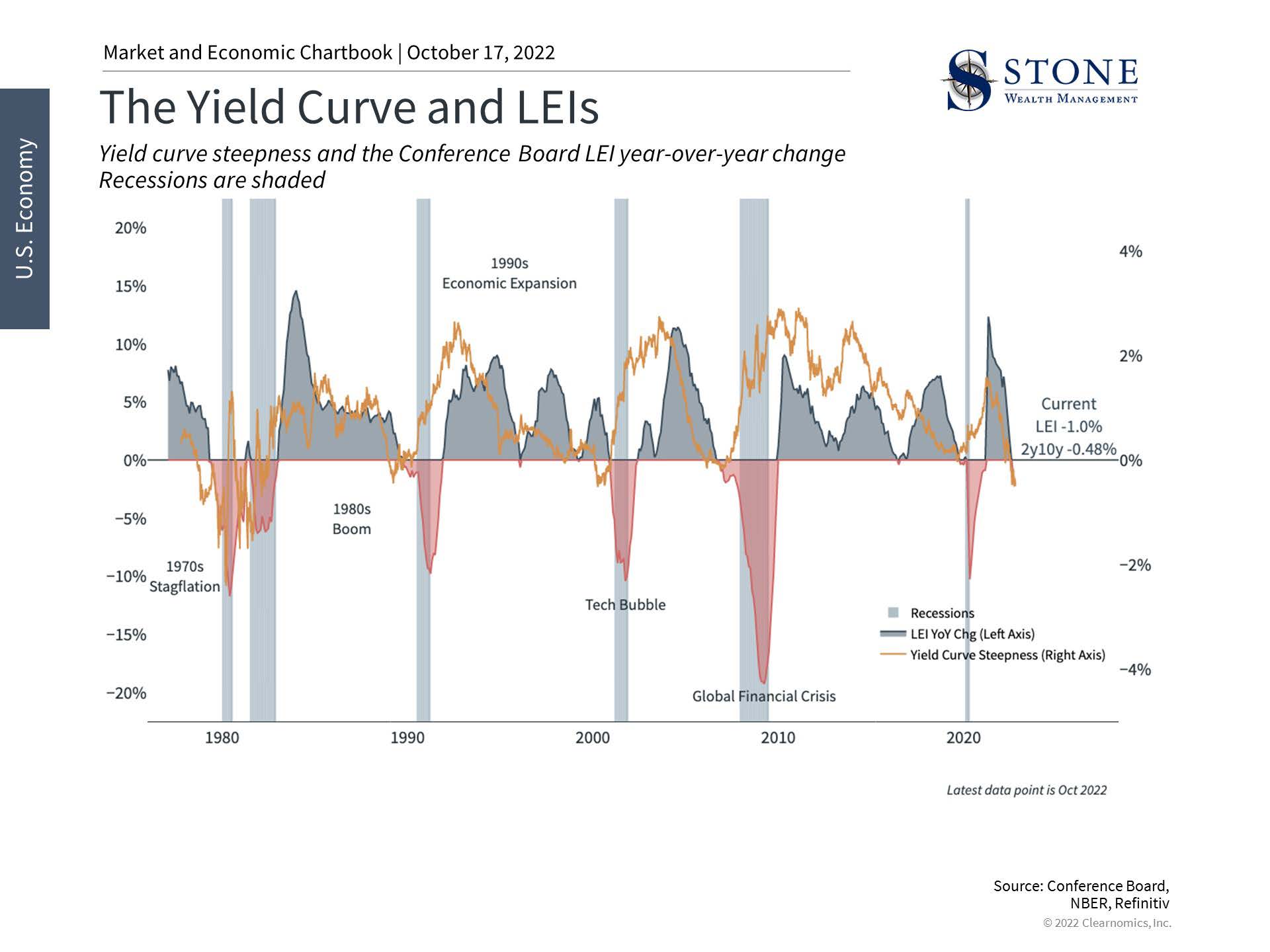 For this reason, many investors continue to worry about a so-called "hard landing," a scenario in which the Fed must induce a recession in order to regain control over inflation. Many on Wall Street are predicting that there could be a recession over the next year as a result.

However, it's important to distinguish between the many things investors mean when they say "recession." A casual definition involves two negative quarters of GDP growth. This has already occurred with the first and second quarters of the year experiencing GDP declines of 1.6% and 0.6%, respectively. A more official definition would involve a challenging downturn, one in which unemployment rises. This is what the Fed already expects based on their latest economic projections which show unemployment rising to 4.4% by the end of next year.

Regardless of which scenario plays out, it's important to maintain some perspective. While none of these situations is positive, they are still quite different than what occurred during the initial stages of the pandemic, when GDP fell 30% at an annualized rate, or during 2008 when the financial system was on the brink of collapse. Historically, recessions occur periodically and are important since they allow for an "economic reset," paving the way for future growth.

The money supply is no longer expanding 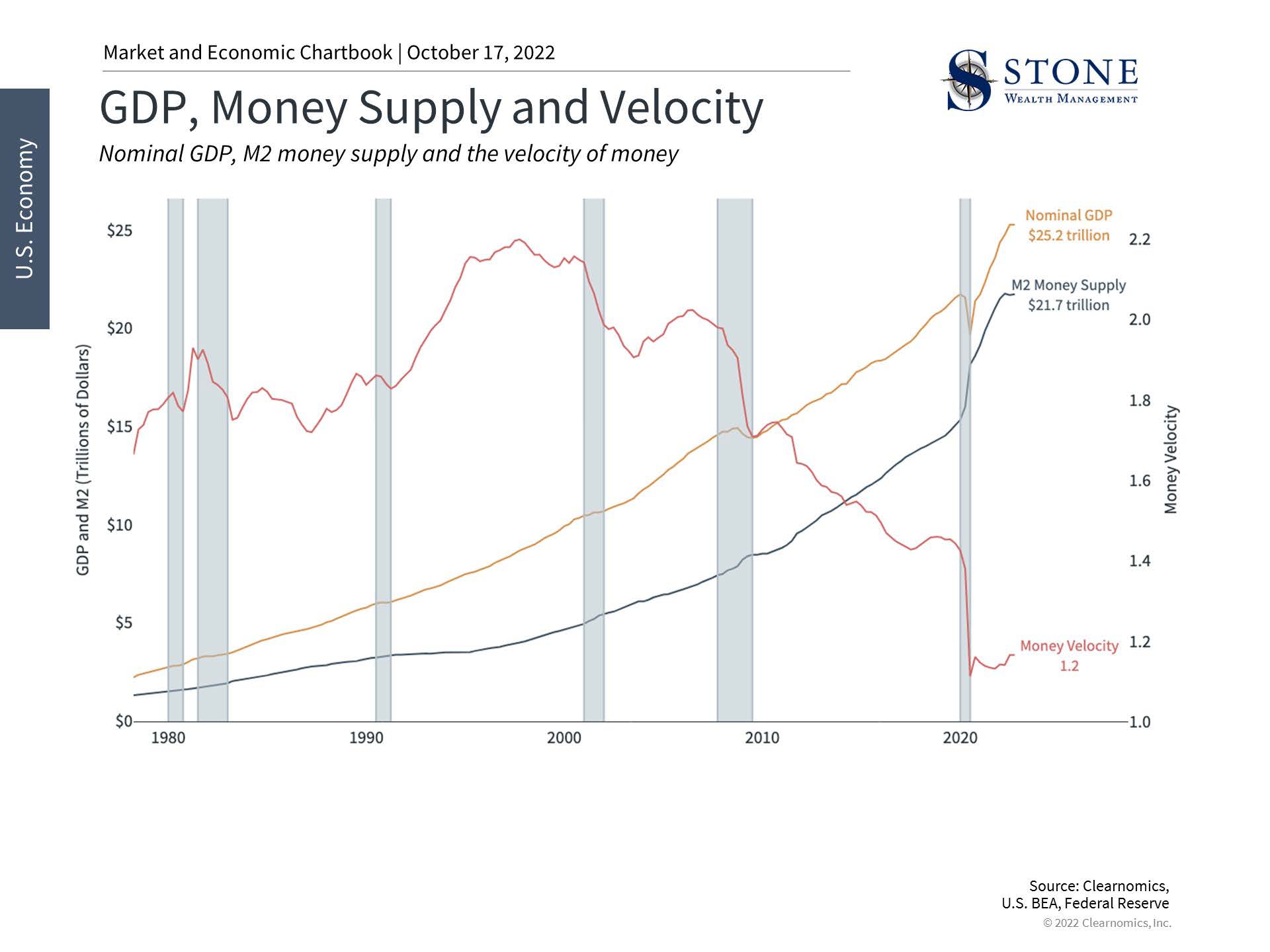 So, the natural question is how far the Fed will have to raise rates this time. The Fed's actions can already be seen in measures of the money supply including M2 in the chart above. One popular framework, the "Taylor Rule," helps policymakers understand the appropriate level of policy rates based on economic trends. There are many versions of these rules, all based on the idea that the Fed should raise rates if inflation or growth are higher than average. Higher rates bring inflation and growth back in line which then allows policymakers to lower rates again. Thus, while no central bank follows a monetary rule like this exactly, especially because the data can change over time and monetary policy acts with long lags, it can be a helpful tool.

What does the Taylor Rule tell us today? The current levels of inflation and economic output would imply a fed funds rate in the range of 7.5% to 12% depending on which version of the Taylor Rule is used. If this seems surprisingly high compared to the current fed funds rate of 3%, it's only because inflation is so much higher than expected. Of course, the Fed will not adhere to the Taylor Rule exactly but all of this points to the Fed continuing to raise rates through the rest of this year and into 2023.

Retirees will benefit from a sizable cost-of-living adjustment 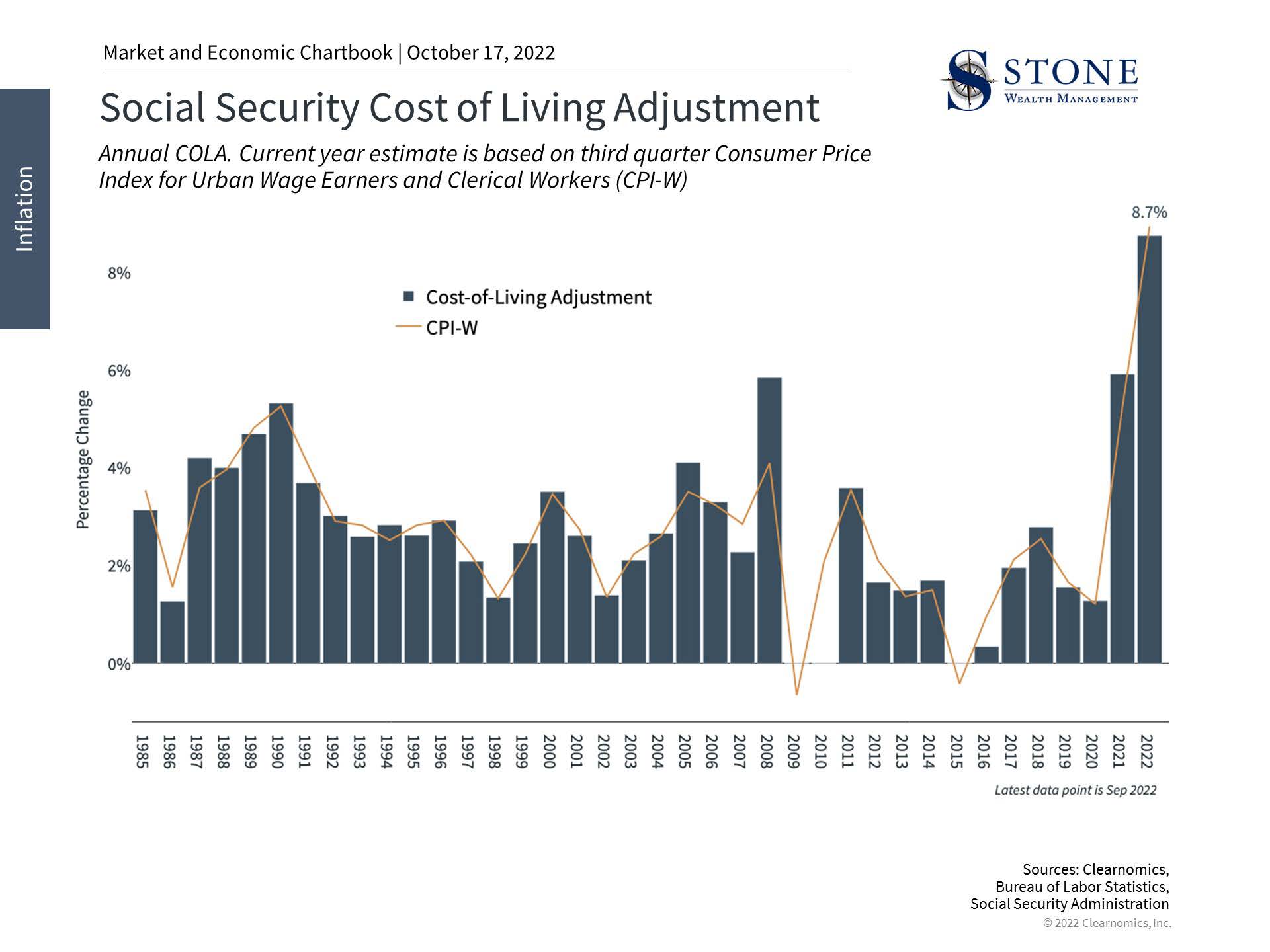 There are two silver linings to inflation and this market environment. The first is that the Social Security Cost-of-Living Adjustment (COLA) for 2022 is officially the largest since the early 1980s. While this doesn't necessarily make up for low COLA adjustments since 2009, it is positive for those collecting Social Security, nonetheless. This is especially true if some important prices actually decline since these adjustments will remain in place. For example, the fact that the national average gasoline price has fallen from $5 per gallon to around $3.90 is already positive.

The second is that market valuations are the most attractive in years, with the price-to-earnings ratio of the S&P 500 hovering around 16x. Investors should remember that long-term portfolio returns are often defined by decisions made in challenging times like these, and not when markets have already recovered. Those who overreact and shift to cash will not only miss the eventual market rebounds but will have the value of their cash eroded by inflation. While it's easier said than done, having the discipline and patience to stay invested is often rewarded, just as it was during the 2009 and 2020 recoveries.