In response to worsening inflation, the Fed raised policy rates by 75 basis points last week - the largest individual hike since 1994. The Fed also sharply lowered their growth projections, increased their inflation forecasts, and boosted their year-end rate target to 3.25%, while emphasizing that they are "strongly committed to returning inflation to its 2 percent objective." At his press conference, Chair Jerome Powell acknowledged that accelerating inflation is difficult for households and everyday individuals. As prices have increased for food, gas, and other necessities, investors have grown increasingly concerned about the impact on the economy and markets. How can long-term investors view this difficult investing environment with the proper perspective?

This has been a challenging market because there have been very few places to hide, and there is no doubt that many investors are tempted to sell and simply hold cash. Markets have yet to stabilize this year and the S&P 500 and Nasdaq are both in bear market territory, having declined 23% and 31% year-to-date, respectively. What has made it especially difficult is that bonds have had one of their worst years in history due to the sudden jump in rates. The U.S. Aggregate Index of bonds has fallen 11.5% year-to-date while the corporate index has pulled back 15%.

In many ways, investors are stuck between a rock and a hard place. On the one hand, many are applauding the Fed's latest effort to combat the highest inflation rates in forty years. On the other hand, doing so by tightening interest rates will likely soften demand for goods and services across the economy. In the best case, spending will slow and inflation will moderate but remain above historical averages. In the worst case, tightening financial conditions will lead to a recession, albeit possibly a mild one.

Mortgage rates of 5.8% and gas prices around $5 are already creating economic weakness in areas such as the housing market and retail spending. Last week's retail sales report was a negative surprise with consumers spending -0.3% less in May than April. On a year-over-year basis, retail spending still grew 8.1%. However, these figures aren't adjusted for inflation. So, with the consumer price index rising 8.6% over the same period, consumers most likely received less for their money over the past year, even if they felt as if they were spending more. Thus, it's no surprise that there are now signs of belt-tightening.

In this environment, there are two facts that long-term investors should remember. First, the temptation to sell investments and hide in cash is even more counterproductive today because high inflation erodes the value of that cash. Additionally, it's difficult even in more normal times to try to time the market since rebounds can occur when investors least expect them.

For both of these reasons, overreacting and shifting from an appropriately constructed portfolio is likely to be counterproductive. It is better to hold onto a diversified portfolio that can help offset these inflationary pressures going forward, even if it has struggled so far this year alongside almost all asset classes. As the old saying goes, it's best to be fearful when others are greedy and greedy when others are fearful. While there are many reasons to be negative, this is also the best opportunity to take advantage of the most attractive valuations in years.

Second, markets tend to focus too much on the Fed, even in good times. The truth is that the core drivers of inflation are either out of their control or the result of stimulus decisions made two years ago by the Fed and Congress. Specifically, the Fed acknowledges that it cannot directly address higher food and energy prices which indirectly affect all prices. On a technical basis, these prices, which hurt consumers the most, are important components of "headline" inflation. Traditionally, economists and the Fed closely follow "core" inflation, which excludes the prices that matter the most today, since policy tools can only affect longer-term trends.

Perhaps the best the Fed can do is to prevent inflation expectations from worsening and leading to an inflationary spiral. This would be a situation reminiscent of the 1970s in which persistently higher prices lead workers to demand higher wages which further causes businesses to raise prices. It goes without saying that whether this happens will depend on the direction of energy and food prices, which in turn depends on global conflicts and supply challenges.

The timing of the global economic recovery and the war in Ukraine created the perfect storm for the prices that impact consumers the most. Still, oil prices have fluctuated and are now back to the same levels they reached in March. There are also signs that some supply chain and manufacturing problems are easing, including for semiconductors and building materials. So, while these pricing pressures have remained high, they could naturally fall in the coming months.

Ultimately, investors ought to focus on what they can control. In this challenging market, sticking with a well-considered financial plan is still the best way to achieve long-term financial goals. Below are three charts that highlight the importance of the Fed's historic rate hike on consumers and inflation.

1. All inflation measures are near their peaks 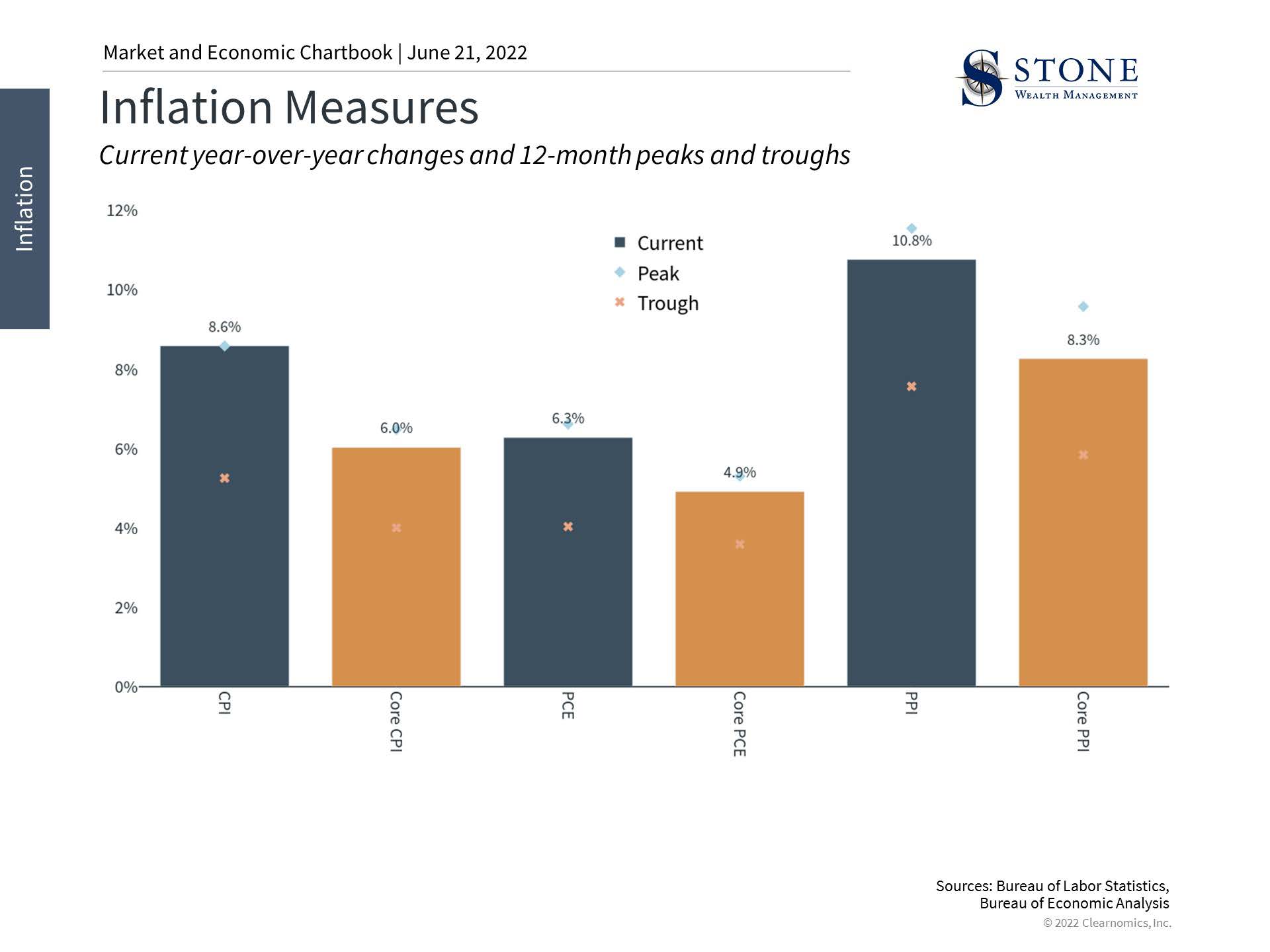 All inflation measures are at or near their recent peaks. This is especially true for measures based on consumer prices, such as the Consumer Price Index and Personal Consumption Expenditures. 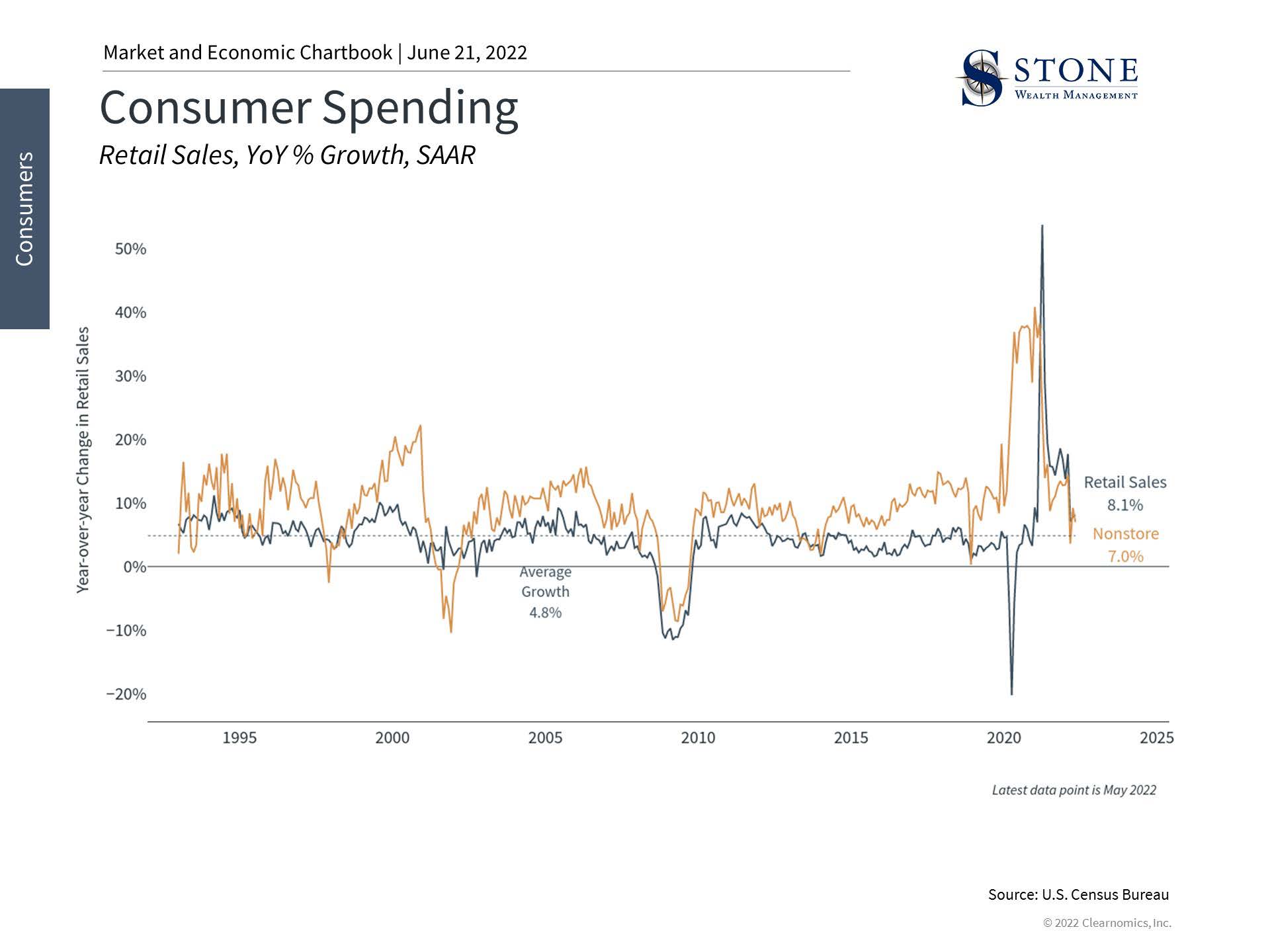 Retails sales unexpectedly declined in May compared to the prior month. In all likelihood, the actual numbers are worse than they appear because they don't account for inflation. These early signs suggest that consumers are responding to high inflation rates for necessities such as food and gas.

3. The Fed is stepping up the fight against inflation 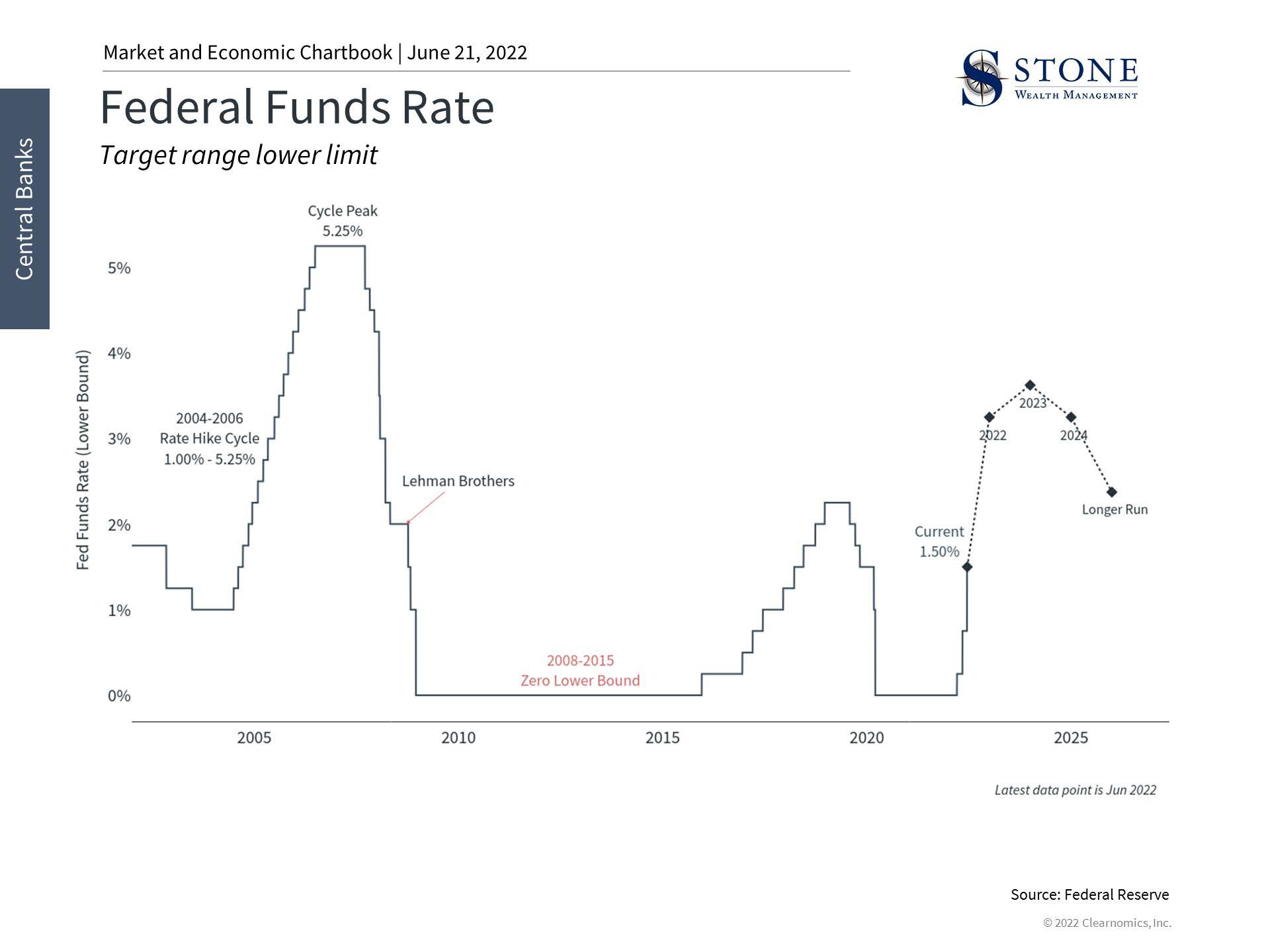 The Fed raised its main policy rate by 75 basis points in June, the largest individual rate hike in 28 years. However, the Fed can't control many of the underlying drivers of inflation such as supply chain problems, high energy prices, etc.