Energy prices have been a major factor driving inflation higher this year. The strong economic recovery and the war in Ukraine have boosted the demand for energy at the same time that supplies of oil and natural gas have fallen. Gasoline prices, in particular, have become a symbol of the burden that inflation places on consumers, and where they go from here will affect consumer spending, Fed policy, and stock market returns. What should investors know about energy prices as they position for the next phase of the market cycle?

The challenges in the energy market of the past six months only add to the storylines of the past few years. During the pandemic lockdown, the front-month oil contract fell into negative territory. This had never occurred in history and was due to a collapse in demand made worse by a lack of oil storage capacity. A negative price meant that contract holders were so desperate to not take delivery of oil that they were willing to pay others to take their contracts. 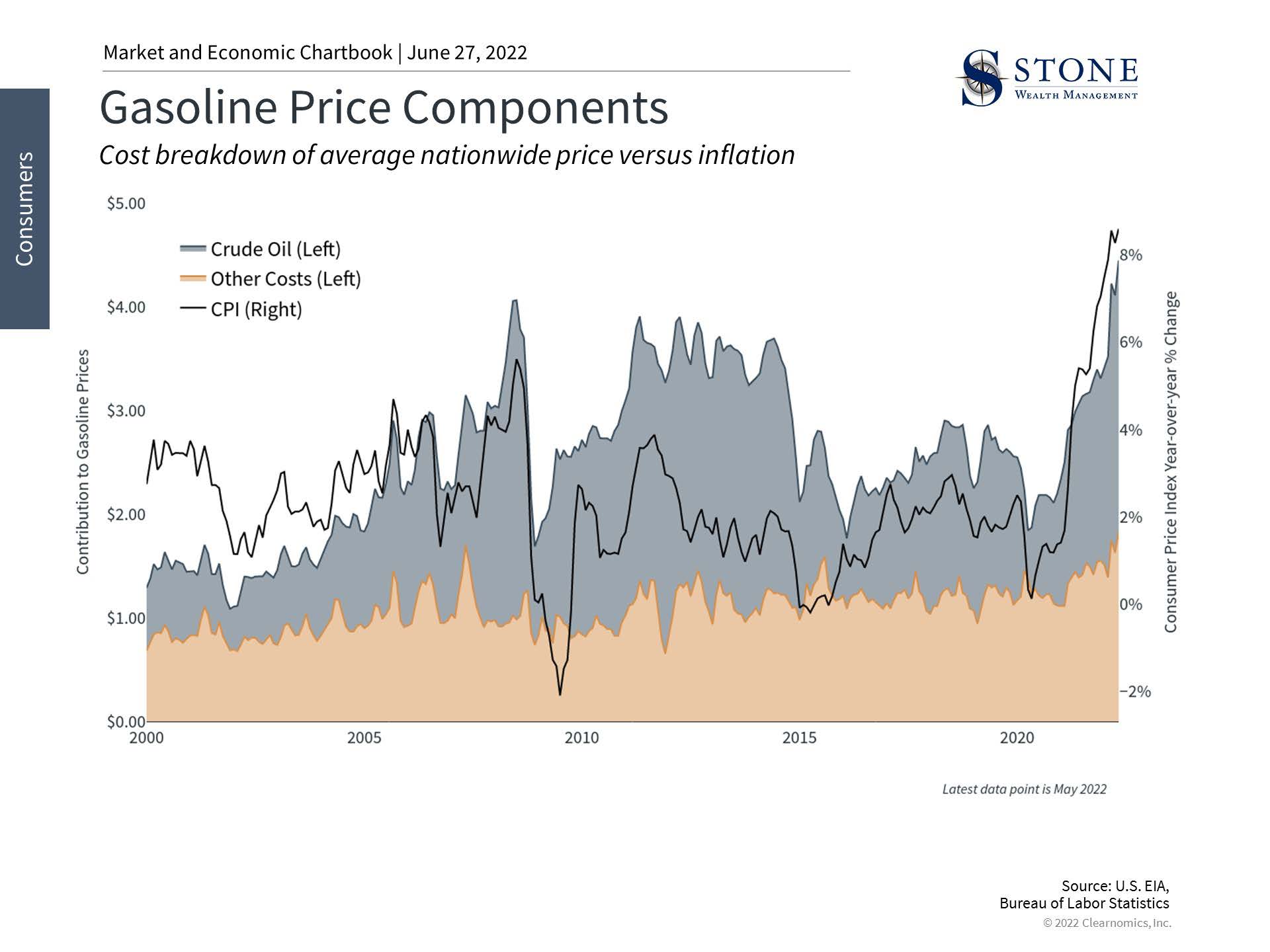 Since then, the oil market has turned around completely as prices first recovered alongside the economy, then spiked this year following geopolitical events, with a few bumps along the way due to growth concerns. Brent crude jumped to nearly $130 a barrel immediately after Russia's invasion of Ukraine. It has since settled in around $110 a barrel, the same level as in March, but these are still the highest oil prices since 2014.

In this environment, there are at least three major developments for investors to follow. First, energy prices have been a major contributor to rising inflation. Last month's Consumer Price Index report, for instance, showed that energy prices rose 35% over the previous year and gasoline prices skyrocketed 49% and are now above $5 per gallon on average, a new record.

The chart above, which breaks down the components of gas prices, shows that the largest contributor is simply the jump in crude oil prices. Costs associated with refining, distribution and marketing, and taxes have contributed also but to a much smaller degree. The chart also highlights the strong relationship between gasoline and the Consumer Price Index. 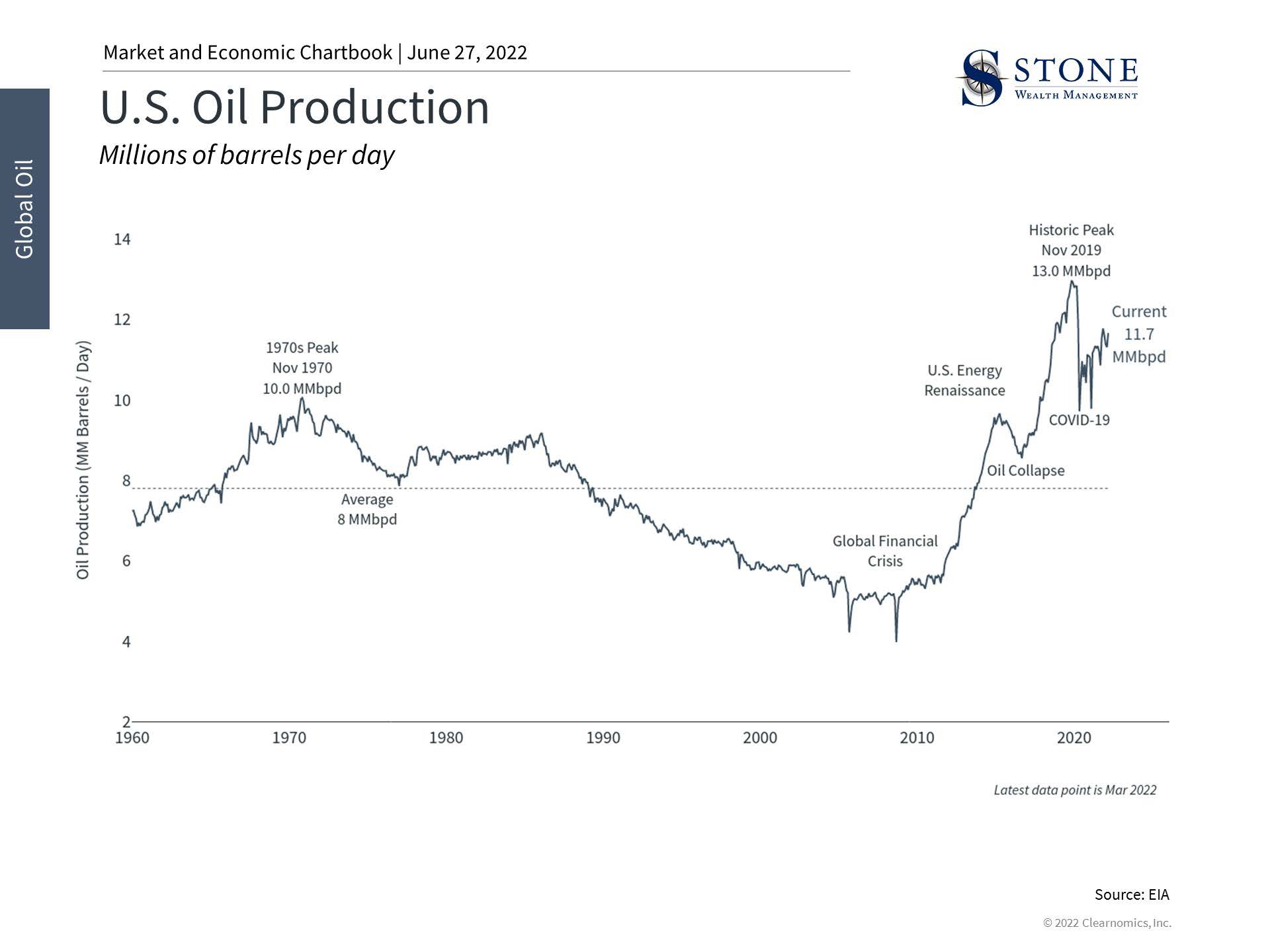 For this reason, gasoline and oil are perhaps the most important indicators for the path of the economy and markets. To combat higher energy prices, especially at the pump, the U.S. administration has released oil from the Strategic Petroleum Reserve, is negotiating with Saudi Arabia to increase their output, and has floated the idea of a gas tax holiday (although neither party supports this and only amounts to 18.4 cents per gallon).

This situation may seem odd given that the U.S. is now the top oil producer in the world due to the U.S. Energy Renaissance of the past decade. However, not only has U.S. oil production not fully recovered, but most U.S. refiners require imported oil to make products like gasoline.

The Fed has become especially sensitive to the impact of gas prices on headline inflation, even though their policy tools can't directly fix the disruptions to supply. This has spurred the Fed to raise rates at the fastest pace since the early 1990s. Whether the Fed maintains this pace will be determined by consumer expectations on inflation which are largely driven by energy costs. Steadier oil prices over the past three months are a positive but uncertain sign of where inflation may go from here. 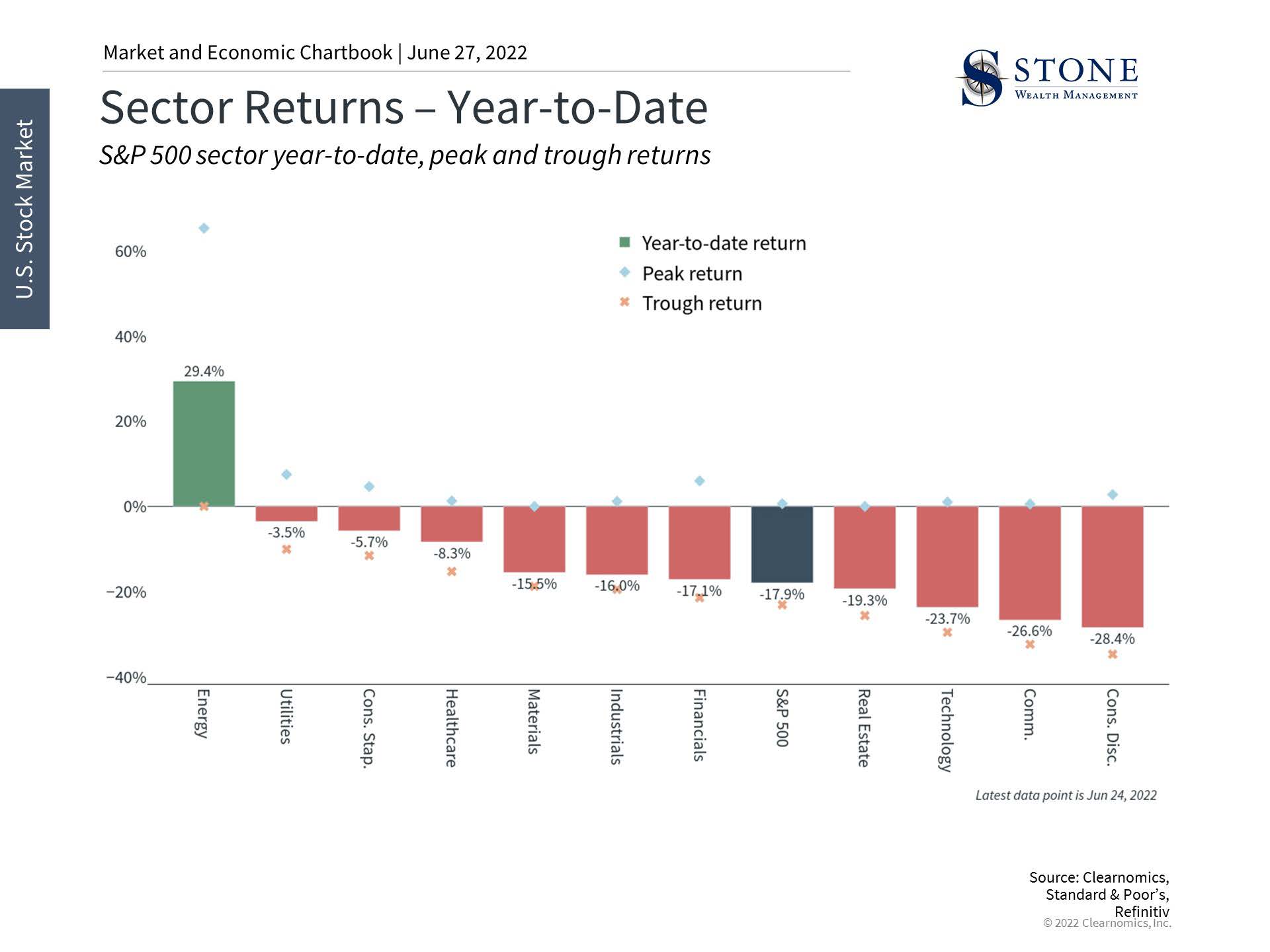 Third, the energy sector of the stock market has benefited from higher prices and is the only sector in the black this year, although its year-to-date gain has been cut to 29% from a peak of 65%. However, for those who are properly diversified, the energy sector accounts for less than 5% of the S&P 500's market capitalization, even after all other sectors have fallen. The fact that the sector has made these gains emphasizes the importance of investing within and across markets.

The next several months will be challenging for investors as markets continue to adjust to high inflation. However, investors are always faced with potential problems whether it's financial crises, trade wars, pandemics, lofty valuations, rising interest rates, geopolitical conflicts, or other challenges. Clearly understanding the key issues while resisting the urge to overreact is still the best approach to achieving long-term financial success.