As the economy slows, some investors are worried about the possibility of a recession as well as the long-term consequences of an ever-growing government debt. These concerns are timely due to recent economic data and policy decisions, including the Inflation Reduction Act making its way through Congress. While these are all important issues, investors should view them with the right perspective. Despite many economic, political and global concerns, the fact that the S&P 500, Dow and Nasdaq have gained 13%, 9.6% and 18.9% since mid-June, respectively, is a reminder that markets can rebound when it's least expected. How should investors react to ongoing economic and policy concerns?

The recent jobs data for July show that the total number of jobs lost during the pandemic - about 22 million - have now been regained. This occurred in record time, requiring only two-and-a-half years. In contrast, the number of jobs lost in 2008 didn't recover until 2014, or over six years later. This matters because the strength of the job market increases the odds of a so-called "soft-landing" in which growth remains healthy as the Fed raises rates, allowing inflation to ease and consumers and businesses to get back on track. 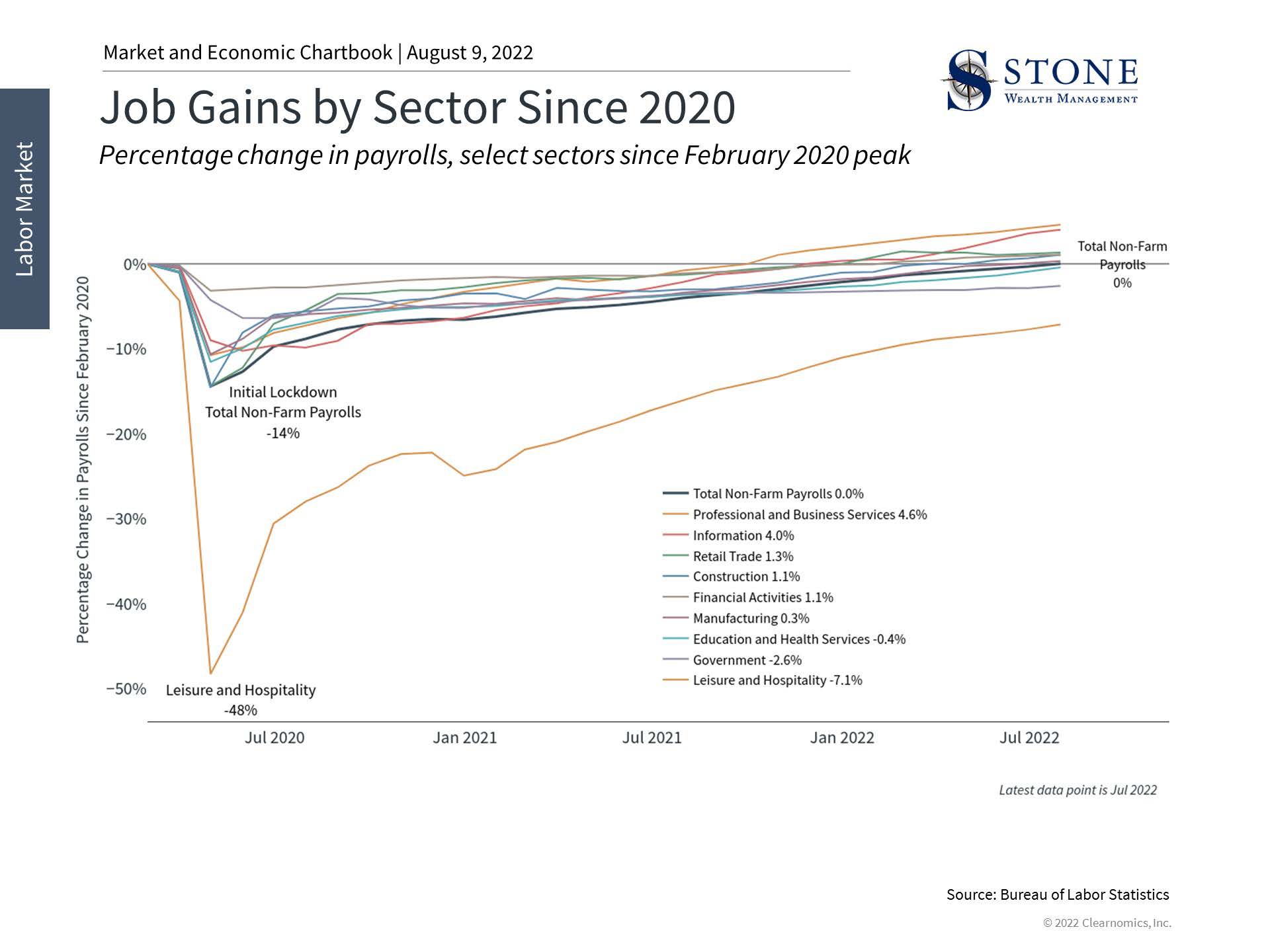 Of course, not all sectors have experienced a similar rebound which the chart above highlights.

It's not surprising that Leisure and Hospitality, which includes restaurants, bars, hotels, concert venues, and more, is still struggling after shrinking by half during the pandemic lockdowns. The number of government jobs has also declined across the local, state and federal levels. This is unlike sectors such as Information, Professional and Business Services, and Retail Trade, encompassing a wide variety of businesses including telecommunications, tech, consulting, and legal services, which mostly recovered by the second half of 2021.

Not only do the jobs data matter for the possibility of a recession, a strong economy is also one of the keys to maintaining fiscal balance when it comes to government deficits in the long run. This is especially important with the federal debt growing to over $30 trillion, or 124% of GDP. In this context, the Senate recently passed the Inflation Reduction Act along party lines. The bill has the stated goal of reducing the budget deficit and combating inflation. This is primarily done through provisions such as a 15% minimum tax rate on large corporations, drug pricing reforms, increased funding to the IRS to collect additional taxes, and spending on climate change. 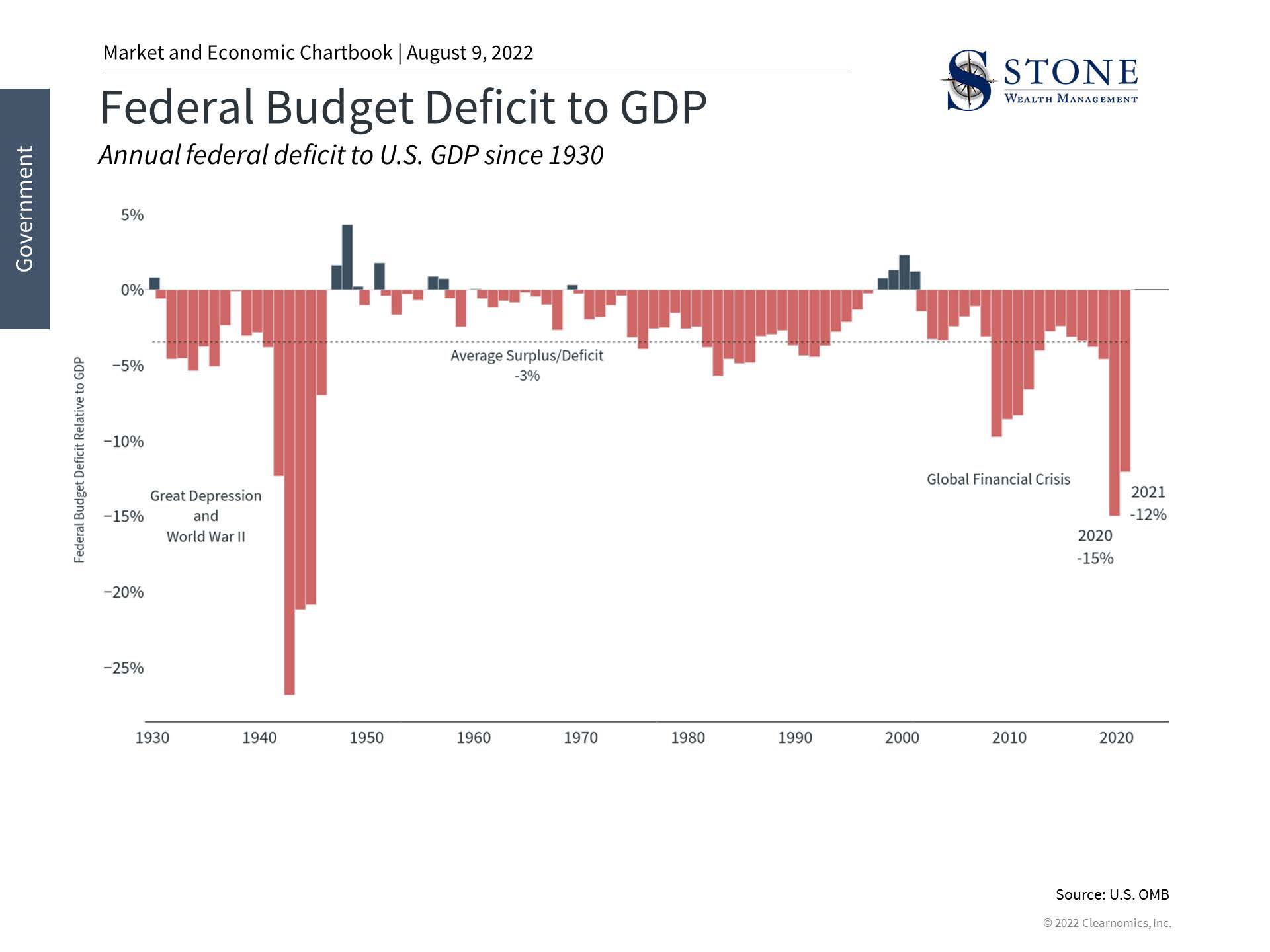 Whether this can impact inflation in a meaningful way is a matter of debate. How the government taxes and spends is naturally a controversial topic that impacts the economy and markets in complex ways. At its core, budget deficits occur when the government spends more than it collects in taxes and other sources of revenue, which adds to the total debt. Even though tax revenues tend to increase as the economy grows (even without raising tax rates), they have been outpaced by spending over time.
The Congressional Budget Office (CBO), a non-partisan arm of Congress that conducts budgetary and economic analysis, recently published their annual long-term budget outlook (prior to the Inflation Reduction Act). During the pandemic, government spending ballooned to support the economy which added trillions of dollars to the national debt. This caused the deficit to spike to 15% of GDP in 2020 and 12% in 2021. With that spending behind us, the CBO projects that the deficit will improve to 3.9% of GDP in 2022.
However, the CBO also projects that the annual deficit will average 10% of GDP 20 years from now, in the 2043 to 2052 timeframe. By 2052, they project that net interest payments alone will rise to 7.2% of GDP. Thus, a common concern among investors is how this will impact the country's ability to finance itself and how it might affect the economy. In its report, the CBO acknowledges and explores possibilities such as the federal government crowding out private investment, rising interest costs driving up interest payments to foreign Treasury holders, and more. Beyond these factors the report examines the potential risk of fiscal crises (last experienced in 2011), the erosion of confidence in the ability for the federal government to pay off its debts, and constraints on policymakers to implement policy.
Treasury securities are still primarily held by U.S. entities 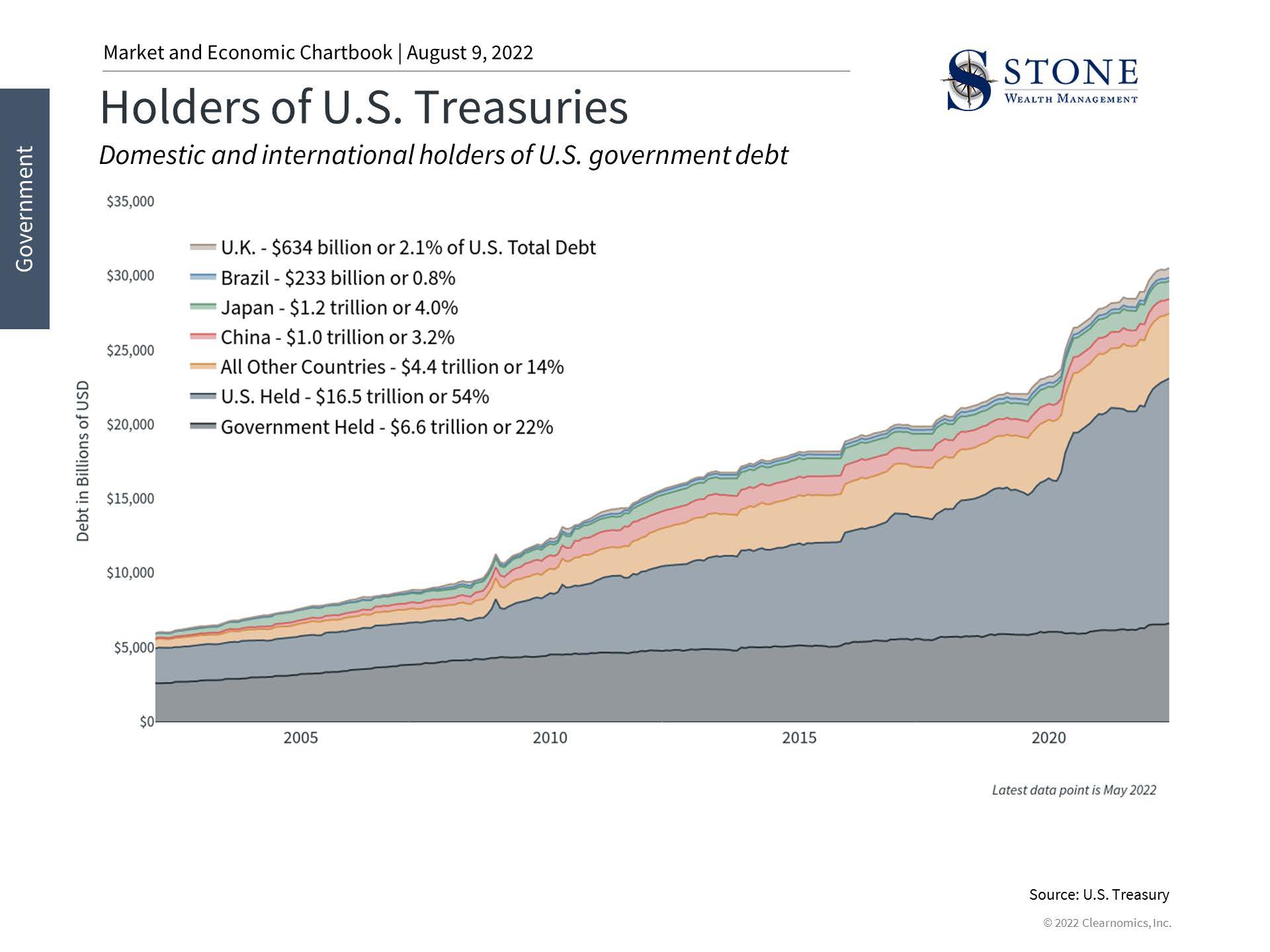 All of this may come across as a lot of gloom and doom, especially for those who have worried about such issues for decades. However, it's important to distinguish between what matters as citizens, voters and taxpayers, and what matters as long-term investors. As individuals, many have strong personal and political views on government spending and taxation, and what it may mean for the country over the coming generations. However, this can be distinct from whether deficits directly or indirectly impact the economy and markets, and more importantly, investment portfolios.

For example, even after the trillions of pandemic spending, about two-thirds of the national debt is held either by the U.S. government itself or by U.S. citizens. And while it's true that rising deficits could make Treasuries less attractive in the future, hampering the government's ability to roll its debt, there have not been signs of it yet. Even in 2011, when Standard & Poor's downgraded the U.S. debt during the fiscal cliff standoff, investors didn't sell their Treasuries - they rushed to buy more. Ironically, this is because U.S. debt securities are still the standard for stable, risk-free assets in the world.

Perhaps most importantly, markets have done well regardless of the exact level of government debt and taxes over the past century. As unintuitive as it might seem, the best time to invest over the past two decades has been when the deficit has been the worst. These periods represent times of economic crisis when the government is engaging in emergency spending, which tends to coincide with the worst points of the market. And while this may not be the most repeatable investment strategy, it does underscore the importance of not over-reacting to fiscal policy in one's portfolio.